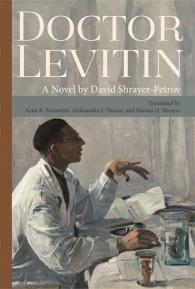 A Novel by David Shrayer-Petrov
Translated by Arna B. Bronstein, Aleksandra I. Fleszar, and Maxim D. Shrayer

Available now for the first time in English, Doctor Levitin is a modern classic in Jewish literature. A major work of late twentieth-century Russian and Jewish literature since its first publication in Israel in 1986, it has also seen three subsequent Russian editions. It is the first in David Shrayer-Petrov’s trilogy of novels about the struggle of Soviet Jews and the destinies of refuseniks. In addition to being the first novel available in English that depicts the experience of the Jewish exodus from the former USSR, Doctor Levitin is presented in an excellent translation that has been overseen and edited by the author’s son, the bilingual scholar Maxim D. Shrayer.

Doctor Levitin is a panoramic novel that portrays the Soviet Union during the late 1970s and early 1980s, when the USSR invaded Afghanistan and Soviet Jews fought for their right to emigrate. Doctor Herbert Levitin, the novel’s protagonist, is a professor of medicine in Moscow whose non-Jewish wife, Tatyana, comes from the Russian peasantry. Shrayer-Petrov documents with anatomical precision the mutually unbreachable contradictions of the Levitins’ mixed marriage, which becomes an allegory of Jewish-Russian history. Doctor Levitin’s Jewishness evolves over the course of the novel, becoming a spiritual mission. The antisemitism of the Soviet regime forces the quiet intellectual and his family to seek emigration. Denied permission to leave, the family of Doctor Levitin is forced into the existence of refuseniks and outcasts, which inexorably leads to their destruction and a final act of defiance and revenge on the Soviet system.

A significant contribution to the works of translated literature available in English, David Shrayer-Petrov’s Doctor Levitin is ideal for any reader of fiction and literature. It will hold particular interest for those who study Jewish or Russian literature, culture, and history and Cold War politics.

David Shrayer-Petrov, a well-known contemporary Russian-American writer and medical scientist, was born in Leningrad in 1936 and immigrated to the United States in 1987. He has published twenty-five books in his native Russian and three books of fiction in English translation, including Dinner with Stalin and Other Stories.

Maxim D. Shrayer, the author’s son and translator, is professor of Russian, English, and Jewish studies at Boston College and a 2012 Guggenheim Fellow. His books include Waiting for America: A Story of Emigration and Leaving Russia: A Jewish Story.

The American-born Arna B. Bronstein and the Polish-born Aleksandra I. Fleszar are professors of Russian and Slavic studies at the University of New Hampshire. Longtime collaborators, they have co-authored acclaimed textbooks of Russian, including Making Progress in Russian, and have translated fiction and nonfiction from the Russian. They have previously translated David Shrayer-Petrov’s short novel Strange Danya Rayev and his short stories.

A heartrending novel about a Soviet Jewish family with a dream of leaving for Israel. Often tragic, always vivid, Doctor Levitin is a startling fantasy of revenge and redemption.

– Joshua Rubenstein, author of The Last Days of Stalin

This novel is a testimony to the highest strength of spirit of Soviet Jews. The novel’s key universal theme of man’s opposition to the suppression and enslavement of a police state takes it into the ranks of the most significant achievements of contemporary humanistic literature, remaining relevant to this day.

– Roman Katsman, author of Nostalgia for a Foreign Land: Studies in Russian-Language Literature in Israel

Osip Mandelstam spoke of the 'end of the novel as a result of the end of biography.' In the twentieth century, one's biography isn’t always merely a product of fate or chance. David Shrayer-Petrov's novel is about such a biography…. If Doctor Levitin, the kindest person of the most even temper and calm demeanor, turns into a possessed avenger, this cannot be explained in psychological terms, except by the absurdity of the position in which he finds himself—and of the destiny he shares with thousands of other [refuseniks].

– Victor Terras, professor emeritus at Brown University and author of The Young Dostoevsky and A History of Russian Literature

David Shrayer-Petrov survived living hell and transferred his experiences to fiction. His protagonist, a Jew, a Refusenik of Soviet days, must wait and wait, reason with the unreasonable, and search the shadows for portent answers. In this major Jewish-Russian novel, Shrayer-Petrov raises the pitch of storytelling to devastating levels. Doctor Levitin, his family, and the Soviet Union will never be the same.

In Russian intelligentsia circles, David Shrayer-Petrov has become a legend. He became one of the most prominent authors, who witnessed and described the Jewish movement in the late Soviet Era. The significance of the publication of the English translation of the novel Doctor Levitin stretches far beyond the boundaries of Russian-Jewish culture. The novel reveals in what ways the Soviet Jews’ negative identity, determined by anti-Semitism, developed to become one of the biggest native, anti-assimilatory movements among ethnic minorities. Shrayer-Petrov is the poet of the exodus in the biblical sense of the word. Doctor Levitin mixes the documentary elements of a witness report with a fascinating metaphorical narrative drawn from the centuries-old tradition of Judaism.

– Klavdia Smola, adjunct professor in the Slavic department of the University of Greifswald (Germany)

But this is precisely what makes Doctor Levitin a great novel. As in the best works of Russian literature – and it is no accident that the name Levitin resembles Levin from Tolstoy’s Anna Karenina – Shrayer-Petrov’s characters are blind not just to their Israeli destination, but to the consequences of all their decisions and passions, and to the fragility of existence. Israel is no more than a fantasy, but so too, Shrayer-Petrov tells us, are the seemingly solid foundations – the job, the family, the liberty – of everyday life. At a whim, all can be demolished, all taken away.

The first literary work to deal with the experiences of the dissident Jews, written by renowned writer David Shrayer-Petrov, who escaped the Soviet Union in 1987.

– Penny Schwartz, Jewish Telegraphic Agency and The Times of Israel