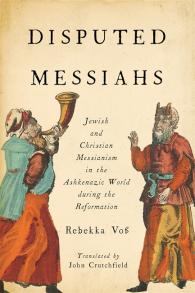 Jewish and Christian Messianism in the Ashkenazic World during the Reformation

Disputed Messiahs: Jewish and Christian Messianism in the Ashkenazic World during the Reformation is the first comprehensive study that situates Jewish messianism in its broader cultural, social, and religious contexts within the surrounding Christian society. By doing so, Rebekka Voß shows how the expressions of Jewish and Christian end-time expectation informed one another. Although the two groups disputed the different messiahs they awaited, they shared principal hopes and fears relating to the end of days. Drawing on a great variety of both Jewish and Christian sources in Hebrew, Yiddish, German, and Latin, the book examines how Jewish and Christian messianic ideology and politics were deeply linked. It explores how Jews and Christians each reacted to the other’s messianic claims, apocalyptic beliefs, and eschatological interpretations, and how they adapted their own views of the last days accordingly. This comparative study of the messianic expectations of Jews and Christians in the Ashkenazic world during the Reformation and their entanglements contributes a new facet to our understanding of cultural transfer between Jews and Christians in the early modern period.

Disputed Messiahs includes four main parts. The first part characterizes the specific context of Jewish messianism in Germany and defines the Christian perception of Jewish messianic hope. The next two parts deal with case studies of Jewish messianic expectation in Germany, Italy and Poland. While the second part focuses on the messianic phenomenon of the prophet Asher Lemlein, part 3 is divided into five chapters, each devoted to a case of interconnected Jewish-Christian apocalyptic belief and activity. Each case study is a representative example used to demonstrate the interplay of Jewish and Christian eschatological expectations. The final part presents Voß’s general conclusions, carving out the remarkable paradox of a relationship between Jewish and Christian messianism that is controversial, albeit fertile. Scholars and students of history, culture, and religion are the intended audience for this book.

Rebekka Voß is an associate professor of Jewish history at Goethe University, Frankfurt. Her research focuses on Jewish cultural history in early modern Europe, with a particular interest in cultural transfer between Jews and Christians.

Voß makes an important contribution to the history of Jewish messianism, entering a field long studied by a variety of scholars, but offering a new and original take on the sixteenth century and on the significance of messianic calculation and activity in Germanic lands. She is also highly original in offering a comparative perspective on Jewish and Christian messianic enthusiasts, their awareness of the other, and their fascinating entanglements. Her contribution to comparative and ‘connecting histories’ represents her most significant addition to the existing literature on the subject.

Voß combines a deep knowledge of both Jewish and German thought with rare linguistic and analytical skills. She is thus able to place the messianic impulses of Jews and German-speaking Christians, so prominent and potent in the early modern world, side by side—the way they existed at the time. Voß shows us how powerful messianic and apocalyptic ideas were to both Jews and Christians, demonstrating their deep impact in religion, politics, culture, and literature. It is careful, insightful, creative, brilliant work.

An original work of original, meticulous, exhaustively detailed, and impressively informative scholarship, "Disputed Messiahs: Jewish and Christian Messianism in the Ashkenazic World during the Reformation" is especially recommended for community, seminary, college, and university library collections.

2 days 46 min ago
Now a National Jewish Book Award Finalist! @JewishBook https://t.co/qTKAeUEPVX
2 days 4 hours ago
RT @Steph_Steinberg: Tomorrow @ 7 p.m.! Join me and @DETWritingRoom at The Whitney for our first #2023AuthorSeries event ft. @waynestate… https://t.co/pssbi2NLNs
6 days 5 hours ago
SAVE THE DATE! Join author Desiree Cooper and illustrator Bec Sloane this Saturday for a behind the scenes look at… https://t.co/cKDBmbewOa