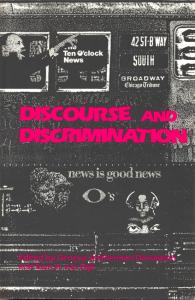 Edited by Geneva Smitherman-Donaldson and Teun A. van Dijk

This collection of essays from scholars in the United States, the United Kingdom, and the Netherlands, examines how biases against minorities in the U.S. and western Europe are perpetuated directly and indirectly through such media channels as newspapers, television coverage, everyday language use, and through the educational curriculum, teacher attitudes, and teacher-student interaction. Written especially for this volume, the essays demonstrate how the dominant population controls not only what happens to subordinate populations, but also how the general public perceives that reality. Discourse and Discrimination is valuable reading for students and scholars in linguistics, discourse analysis, mass communication, sociology, social psychology, and black and ethnic studies.

Geneva Smitherman-Donaldson is a professor in the Department of Speech Communication, Theatre, and Journalism at Wayne State University. She completed her doctoral studies at the University of Michigan and is the author of Talkin and Testifyin: The Language of Black America.

Teun A. van Dijk is a professor of discourse studies at the University of Amsterdam where he also obtained his Ph.D. He is the author of several books on discourse. His latest book is Communicating Racism.