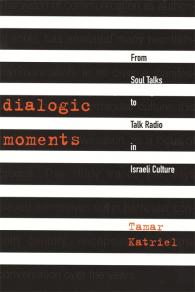 From Soul Talks to Talk Radio in Israeli Culture

The vision of communication as authentic dialogue, as the mutual communion of souls, has animated a great many twentieth century discussions of language and communication, both in scholarly writings and in various forms and contexts of popular culture. In its various manifestations, this communicative utopia has identified dialogue or conversation as a locus of authenticity of both individuals and groups. This study traces the ways in which this utopian vision of communication has played itself out in the particular context of Israeli society through the twentieth century, encapsulating central trends in the evolving Israeli cultural conversation over the years. In this sense, it is a historically-situated study of the cultural fluctuations of a given society in all its particularity. In another sense, however, it seeks to offer a more general statement about the culturally constructed nature of the quest for authenticity as a project of modernity by focusing on conceptions of communication and language as its quintessential loci."
—From the Introduction by Tamar Katriel

Tamar Katriel is professor of education and communication at the University of Haifa in Israel.

Tamar Katriel is a brilliant scholar and Dialogic Moments is an important work. It is consistent with the superlative quality of her earlier books on contemporary Israeli culture. Here too, Katriel takes an urgent topic, theorizes it with exceptional precision, tackles it with the best that ethnographic research can offer, and writes with clarity and passion. The book is tightly focused and nicely stuctured into three parts, one for each mode of communication that she examines--soul talks, straight talk, and talk radio."

Tamar Katriel's study of dialogic moments is an impressive and ambitious tour de force about communication and culture in Israel during the twentieth century. It is insightful, well-written, and draws sustained attention to ways of speaking and speech occasions as formative of national, cultural, and social lives. The book will be of keen interest to many readers including students of anthropology, communication, Israeli and Jewish studies, and sociolinguistics, among others."

Katriel deserves credit for her attempts to stretch conventions and argue for new areas of consideration in communication studies, while modeling one means of addressing the demands of an academic ethnographic career. [This book] offers a wonderful opportunity to generate further dialogic moments."

2 days 53 sec ago
Now a National Jewish Book Award Finalist! @JewishBook https://t.co/qTKAeUEPVX
2 days 3 hours ago
RT @Steph_Steinberg: Tomorrow @ 7 p.m.! Join me and @DETWritingRoom at The Whitney for our first #2023AuthorSeries event ft. @waynestate… https://t.co/pssbi2NLNs
6 days 4 hours ago
SAVE THE DATE! Join author Desiree Cooper and illustrator Bec Sloane this Saturday for a behind the scenes look at… https://t.co/cKDBmbewOa