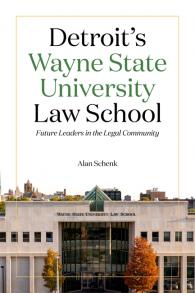 Future Leaders in the Legal Community

Most histories of law schools focus on the notable deans and professors, and the changes in curricula over time. In Detroit’s Wayne State University Law School: Future Leaders in the Legal Community, Alan Schenk highlights the students and their influence on the school’s development, character, and employment opportunities.

Detroit’s Wayne State University Law School begins by placing the school in historical context. Public law schools in major American cities were rare in the 1920s. WSU Law School started as a night-only school on the brink of the Great Depression. It was administered by the Detroit Board of Education’s Colleges of the City of Detroit and was minimally funded out of student tuition and fees. From its opening days, the school admitted students who had the required college credits, without regard to their gender, race, or ethnic backgrounds, when many law schools restricted or denied admission to women, people of color, and Jewish applicants. The school maintained its steadfast commitment to a racially and gender-diverse student body, though it endured significant challenges along the way. Denied employment at selective law firms and relegated to providing basic legal services, WSU law students pressed the school to expand the curriculum and establish programs that provided them with the credentials afforded graduates from elite law schools. It took the persistence of the students and a persuasive dean to change the conversation about the quality of the graduates and for law firms representing the largest corporations and wealthiest individuals to start hiring WSU graduates who now heavily populate those firms. In the twenty-first century, the school gained strength in international legal studies and established two law centers that reflect the institution’s longstanding commitment to public interest and civil rights.

While much of the material was gathered from university and law school archives, valuable information was derived from the author’s recorded interviews with alumni, deans, and professors. This book will strike the hearts of WSU law school students and alumni, as well as those interested in urban legal education and history.

Alan Schenk is a distinguished professor at Wayne State University Law School and is a member of the university’s Academy of Scholars.

In this overdue and welcome history of one of the nation’s most interesting and important public law schools, Alan Schenk – a distinguished faculty member – provides a fine, contextualized account of the intstitution’s development. But, more important, he underscores the school’s ability to seize the moment at critical junctures and to empower otherwise marginalized aspirants to the legal profession – among them, women, Jews, the working poor, and people of color. Schenk thus illustrates, among other important matters, the importance of abundant funding for public education.