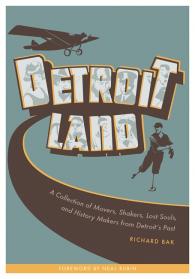 A Collection of Movers, Shakers, Lost Souls, and History Makers from Detroit’s Past

Detroitland is a stunning achievement. Bak's collection of our town's tall tales and true urban legends is the perfect tonic for anyone who has ever loved our poor, wounded city. Or at least their memory of it.

In Detroitland: A Collection of Movers, Shakers, Lost Souls, and History Makers from Detroit's Past prolific local historian and journalist Richard Bak has assembled many of his award-winning historical features, all originally written for such periodicals as Hour Detroit, Detroit Monthly, and Michigan History and now updated and expanded for this collection. In twenty-seven chapters that cover roughly a century of Detroit's rich and colorful history, Bak relives the scandals, mysteries, catastrophes, triumphs, and celebrations that have rocked Detroit. He also introduces readers to the heroes, criminals, stars, and regular people who lived through them, or in some cases, set them in motion.

Detroitland contains the stories behind familiar names like Frank Murphy, the infamous Purple Gang, the Lone Ranger, "Potato Patch" Pingree, and Charles Lindbergh. Yet Bak also reveals lesser-known episodes in Detroit's history, like the ambitious International Exposition & Fair of 1889; the killer heat wave of 1936, with five straight days of hundred-degree temperatures; and the attempted around-the-world flight of Ed Schlee and Billy Brock in the Pride of Detroit in 1927. He introduces readers to little-known and unique Detroit characters, like the fierce Black Legion gang that was Detroit's own version of the Ku Klux Klan; Johnny Miler, the man who walloped Joe Louis in the Brown Bomber's first-ever amateur fight; patrolman Ben Turpin, the terror of Black Bottom criminals; Sophie Lyons, legendary "Queen of the Underworld" and Detroit philanthropist; and Shorty Long, Brenda Holloway, the Velvelettes, and other forgotten Motown artists of the '60s.

Told in Bak's conversational and eminently readable style, the historical essays in Detroitland will prove hard to put down for anyone interested in Detroit's history or those looking for an informative and entertaining read.

Richard Bak is the author of nearly thirty books, including Boneyards: Detroit Under Ground (Wayne State University Press, 2010). He has received four ForeWord magazine Book-of-the-Year awards, a pair of regional Emmys, the Stuart and Vernice Gross Prize for Literature, and many feature-writing awards from the Society of Professional Journalists.

If Bak has ever written a dull story, I haven't read it. As you fly through these tales of the beautiful, the grotesque, scoundrels, heroes, old friends, and stone-cold killers, you'll 'hear' the engaging, made-in-Detroit voice of a master storyteller. And that's not blurb-speak."

No one writes Detroit like Richard Bak. For decades, he has probed the back alleys of Detroit history to uncover tales long forgotten. In Detroitland, he shares some of his best, taking us on a rollicking journey through time and bringing to life a most astounding parade of dreamers, heroes, and scoundrels."

– Tom Stanton, author of Ty and the Babe and The Final Season

National interest in Detroit has never been keener, but this year's bevy of Detroit books range all over the spectrum, and includes some homegrown talents that are hard to ignore. Chief among them would be Richard Bak. Best known for his fascinating contributions to another local magazine (Hour, if you ask), Bak's new book, Detroitland, compiles several of his excellent stories into one neat package that's sure to please any die-hard Detroitophile. Subtitled 'A collection of movers, shakers, lost souls and history makers from Detroit's past,' these are stories you might have heard traced out for you - heck, even stories you thought you knew. But drawing upon historical records, clippings and interviews, Bak pens richly evocative histories that bring to life people and events of Detroit during and leading up to 'the American century.' … It's all done with the touch of a true storyteller, from the gripping first paragraph down to little kickers at the end that leave you both satisfied and wanting more. Detroitland is a wonderful achievement.

Detroitland is meant for those who relish the colorful vignettes that abound in Detroit's past and who appreciate the value of popular history. . . . These stories may encourage more people to preserve tales, documents, and records about their local communities. As Detroit News columnist Neal Rubin says in the foreword, Detroitland is, like the city, 'a place of mayhem, magic, and mystery.' Here indeed is a history to cherish.

Detroitland is a stunning achievement. Bak's collection of our town's tall tales and true urban legends is the perfect tonic for anyone who has ever loved our poor, wounded city. Or at least their memory of it."