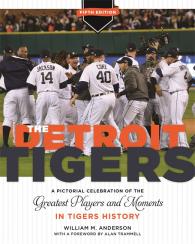 A Pictorial Celebration of the Greatest Players and Moments in Tigers History, 5th Edition

William M. Anderson
With a Foreword by Alan Trammell

With over 500 carefully selected photographs, the fifth edition of The Detroit Tigers vividly illustrates the history of major league baseball in Detroit from 1881 through the 2014 season. Author William M. Anderson presents highlights and lowlights of each Tigers season and gives a context for appreciating the careers of the many players whose images grace the pages of the book.

In thirteen chapters, The Detroit Tigers covers the team’s history decade by decade. Anderson surveys the Tigers’ earliest days, formidable championship teams, and legendary players, and updates this edition with the team’s exploits since the 2008 season. He details the recent star-studded Tigers cast, including Miguel Cabrera, Justin Verlander, Max Scherzer, Victor Martinez, and David Price, and looks at the team’s four consecutive Central Division titles, 2012 pennant win, and seasons of record-breaking attendance, despite its disappointments in deeper post-season play. Anderson has searched to find the most interesting and rarely seen photos for this volume, visiting all major repositories of baseball photographs as well as private collections. Presented chronologically with ample description, the photos form the core of this impressive book.

The Detroit Tigers also includes a foreword by former Tigers shortstop and later, manager, Alan Trammell. Tigers fans old and new will appreciate the exhaustive history and striking images in this volume.

William M. Anderson is the author or editor of ten books dealing with historical topics, including The Glory Years of the Detroit Tigers (Wayne State University Press, 2012). He is the former director of the Michigan Department of History, Arts and Libraries and the former president of two colleges.

Nobody knows the Tigers the way Bill Anderson does, and he brings the team's rich history to life in this lavishly illustrated, meticulously researched chronicle. On every page, Tigers fans will find new delights to marvel at and striking new images to bring back memories of the team's glory years and of the players who wore the old English D with pride.

– Peter Morris, author of A Game of Inches: The Stories Behind the Innovations That Shaped Baseball and Baseball Fever: Early Baseball in Michigan

Detroit fans will cherish this book . . . A very attractive volume.

The book is a gem, the most comprehensive photographic history of the Tigers ever published.

Dr. Bill Anderson bats better than .644 in his fifth edition of his book The Detroit Tigers: A Pictorial Celebration of the Greatest Players and Moments in Tigers History.

Enhanced with more than 500 carefully selected photographs, this newly updated fifth edition of The Detroit Tigers: A
Pictorial Celebration of the Greatest Players and Moments in Tigers History
vividly illustrates the history of major
league baseball in Detroit from 1881 through the 2014 season.

A must-read for any Tigers fan. The pictures alone give you goosebumps.

From the corner of Michigan and Trumbull to frontage on Woodward Avenue, the Detroit Tigers have witnessed some of the greatest moments in baseball. Bill Anderson's updated pictorial history includes amazing photographs of these moments and the players, many of which have never before been published and all of which will be treasured by Tigers fans.

Enhanced with hundreds of black-and-white photographs and notable player statistics, The Detroit Tigers is an ideal gift for any Tigers fan and is highly recommended for community library sports collections.

Bill Anderson, one of Michigan’s premier authorities on the history of Detroit Tigers baseball, has topped his previous masterpiece on this subject with another marvelous collection of carefully selected photographs and an accurate summary history of big league baseball in the Motor city. All the great diamond heroes of Detroit’s past plus more than a few lesser known Tigers players are brought to life in the pages of this book. This volume is a ‘must’ for the library of any fan of Tigers baseball or of the game in general.

– Marc Okkonen, author of Baseball Uniforms of the 20th Century and the Baseball Memories series

Over five hundred carefully selected photographs, many of which have not been published before, complement commentary on the highlights and lowlights of each season. The new edition salutes the historic final season of baseball at the corner of Michigan and Trumbull and welcomes a new century of baseball at Comerica Park.

One certainly does not have to be a baseball fan to appreciate the captivating photos (over 500 of them) [. . .] An impressive volume.

5 hours 16 min ago
Happy Pub Date! HOUSE AND HOME is a collection of poems that intensely explore the beauty & wisdom to be found in w… https://t.co/MYnkKJxcrx
2 days 7 hours ago
Join WSU President M. Roy Wilson for a book talk next Wednesday! Copies of his memoir will be available for sale a… https://t.co/6q5w5dtFtu
4 days 7 hours ago
TONIGHT! Join @stephanie_heit at @ShopBooksweet for local author's night! https://t.co/pTny5OErDe