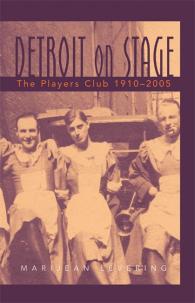 Founded in 1910, Detroit’s Players Club is an all-male club devoted to the production of theater by members for other members’ enjoyment. Called simply "The Players," members of the club design, direct, and act in the shows, including playing the female roles. In Detroit on Stage, Marijean Levering takes readers behind the scenes of the club’s private "frolics" to explore the unique history of The Players, discover what traditions they still hold dear, and examine why they have survived relatively unscathed through changes that have shuttered older and more venerable institutions.

The Players developed during a nationwide vogue for community and art theater and also as Detroit’s auto elites were in the midst of forming new private clubs to add to their own sense of prestige. By the 1920s, The Players had built their own playhouse and established most of their significant traditions, including the monthly frolics, at which the members perform for each other. At the frolics, members in the audience would wear tuxedos and drink beer out of personalized mugs, customs that remain to this day. Prominent Detroiters have always been among the ranks of the Players, and several well-known auto industry figures were members from the beginning, including banker Henry B. Joy, Oldsmobile sales manager Roy D. Chapin, and Ford executives James Couzens and Edsel Ford. Over the decades that followed the club’s founding, its membership and traditions have remained strong despite major world events that shook Detroit such as Prohibition, the Great Depression, and World War II. In looking at The Players of today, Levering explores the camaraderie and sense of history that has kept the club together and relatively unchanged throughout the years. She also examines the club’s notable members and its unique place in Detroit history.

Detroit on Stage places The Players club in the broader contexts of social clubs, explaining how these organizations originate and function. Readers interested in Detroit cultural history and theater studies will enjoy this rare glimpse inside a long-standing Detroit cultural institution.

Marijean Levering is associate professor of theater at Utica College.