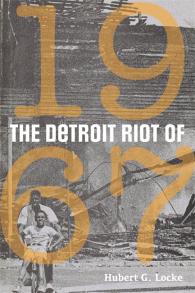 During the last days of July 1967, Detroit experienced a week of devastating urban collapse—one of the worst civil disorders in twentieth-century America. Forty-three people were killed, over $50 million in property was destroyed, and the city itself was left in a state of panic and confusion, the scars of which are still present today.

Now for the first time in paperback and with a new reflective essay that examines the events a half-century later, The Detroit Riot of 1967 (originally published in 1969) is the story of that terrible experience as told from the perspective of Hubert G. Locke, then administrative aide to Detroit’s police commissioner. The book covers the week between the riot’s outbreak and the aftermath thereof. An hour-by-hour account is given of the looting, arson, and sniping, as well as the problems faced by the police, National Guard, and federal troops who struggled to restore order. Locke goes on to address the situation as outlined by the courts, and the response of the community—including the media, social and religious agencies, and civic and political leadership. Finally, Locke looks at the attempt of white leadership to forge a new alliance with a rising, militant black population; the shifts in political perspectives within the black community itself; and the growing polarization of black and white sentiment in a city that had previously received national recognition as a "model community in race relations."

The Detroit Riot of 1967
explores many of the critical questions that confront contemporary urban America and offers observations on the problems of the police system and substantive suggestions on redefining urban law enforcement in American society. Locke argues that Detroit, and every other city in America, is in a race with time—and thus far losing the battle. It has been fifty years since the riot and federal policies are needed now more than ever that will help to protect the future of urban America.

Hubert G. Locke (1934-2018) was a Detroit native who served as administrative aide to the Detroit commissioner of police in 1967. He was dean and professor emeritus at the Daniel Evans Graduate School of the University of Washington and sat on the board of directors for the Police Foundation for over a decade. The Hubert Locke Distinguished Service Award at the University of Nebraska-Omaha is named in his honor to recognize an individual who has demonstrated exemplary commitment to public service.

Hubert Locke’s classic The Detroit Riot of 1967 is a must read for every generation of social scientists and urban policy makers. Locke was there and wrote brilliantly about the worst riot of the twentieth century and its aftermath.

By reading Hubert Locke's The Detroit Riots of 1967, we guard ourselves against the dangers George Santayana saw in not remembering the past: we are condemned to repeat it.