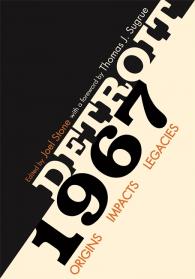 Edited by Joel Stone
With a Foreword by Thomas J. Sugrue

In the summer of 1967, Detroit experienced one of the worst racially charged civil disturbances in United States history. Years of frustration generated by entrenched and institutionalized racism boiled over late on a hot July night. In an event that has been called a "riot," "rebellion," "uprising," and "insurrection," thousands of African Americans took to the street for several days of looting, arson, and gunfire. Law enforcement was overwhelmed, and it wasn’t until battle-tested federal troops arrived that the city returned to some semblance of normalcy. Fifty years later, native Detroiters cite this event as pivotal in the city’s history, yet few completely understand what happened, why it happened, or how it continues to affect the city today. Discussions of the events are often rife with misinformation and myths, and seldom take place across racial lines. It is editor Joel Stone’s intention with Detroit 1967: Origins, Impacts, Legacies to draw memories, facts, and analysis together to create a broader context for these conversations.

In order to tell a more complete story, Detroit 1967 starts at the beginning with colonial slavery along the Detroit River and culminates with an examination of the state of race relations today and suggestions for the future. Readers are led down a timeline that features chapters discussing the critical role that unfree people played in establishing Detroit, the path that postwar manufacturers within the city were taking to the suburbs and eventually to other states, as well as the widely held untruth that all white people wanted to abandon Detroit after 1967. Twenty contributors, from journalists like Tim Kiska, Bill McGraw, and Desiree Cooper to historians like DeWitt S. Dykes, Danielle L. McGuire, and Kevin Boyle, have individually created a rich body of work on Detroit and race, that is compiled here in a well-rounded, accessible volume.

Detroit 1967 aims to correct fallacies surrounding the events that took place and led up to the summer of 1967 in Detroit, and to encourage informed discussion around this topic. Readers of Detroit history and urban studies will be drawn to and enlightened by these powerful essays.

As a young African American Detroit Police officer in 1967, I witnessed the cruelty of rogue, racist police officers who had very little respect for human life. In fact, I almost lost my life to two racist white police officers who shot at me as I returned to my apartment from a long tour of duty. It's frightening that fifty years later we are still dealing with the same fears.

– Isaiah McKinnon, associate professor of education, University of Detroit Mercy. Retired deputy mayor and retired chief of police of the city of Detroit

Detroit 1967 provides invaluable historical context for the events that exploded on July 23, 1967. It is a thoroughly researched and well-written overview of the history of race relations in the city from its founding in 1701 to today and a ‘must-read’ for all who care about Detroit and its future.

This collection of essays provides a very informative racial history of Detroit, ranging from slavery to the Underground Railroad, to the 1943 riot, to deindustrialization. This book is a welcome addition to the race relations literature on Detroit.

Detroit 1967 is a deep dive [ . . . ] It ranges from colonial slavery in Detroit to the present day, and includes some suggestions for the future.

It is editor Joel Stone’s intention with Detroit 1967: Origins, Impacts, Legacies to draw memories, facts, and analysis together to create a broader context for these conversations. Detroit 1967 aims to correct fallacies surrounding the events that took place and led up to the summer of 1967 in Detroit, and to encourage informed discussion around this topic. Readers of Detroit history and urban studies will be drawn to and enlightened by these powerful essays.

A seminal body of outstanding scholarship [ . . . ]

13 hours 20 min ago
HAPPY NATIONAL BOOK LOVERS DAY! In celebration of today, comment your current favorite book or something that you… https://t.co/SqfUAeiLHy
16 hours 14 min ago
QUEERING ANTI-ZIONISM by Corinne E. Blackmer is a queer critique of anti-Zionism, exploring how the Boycott, Divest… https://t.co/jk8OUUN7ku
16 hours 17 min ago
@WSUHumClinic It was such a pleasure to have you here, Carly!