Home » Books » The Desk on the Sea 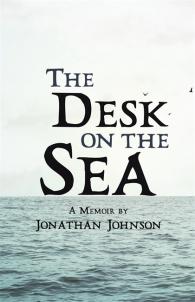 The Desk on the Sea

A Memoir by Jonathan Johnson

The Desk on the Sea begins four years after American poet Jonathan Johnson spread his mother’s ashes in her beloved Lake Superior and moved with his wife and young daughter into a seventeenth-century cottage on Scotland’s North Sea. On an idyllic, desolate coast and in the wild Highlands, Johnson began his search for a way to live through ongoing grief and to take in the wonder of each new day.

Through years of extraordinary suffering by way of multiple ailments, Johnson’s mother, Sheila, endured an astounding number of amputations—a toe, the end of a finger, a foot, whole fingers, the other foot. What she lost in her physical being, she gained in her kindness and generosity. By the time she was told that the only way she could survive a little longer was the amputation of both hands, she was capable of giving those who loved her and herself a beautiful death instead. Inspired by her example of grace and awareness, Johnson and his family gave themselves one year on the coast of Scotland to live by Shelia’s great, guiding principle: We don’t get the days back. They wandered trails along windswept shores and past the stone ruins left by people who’d come and gone before. They played as characters from Harry Potter on deserted beaches. From their cottage, they watched an island lighthouse, counting the seconds between flashes to know exactly when to say "goodnight" so the lighthouse would answer with a wink.

The Desk on the Sea is a chronicle of progress toward one man’s new life goal—to be a father, husband, and poet worthy of his mother’s legacy. Sustained by an unwavering belief that words can help us fully occupy our lives, and that imagination and empathy can transform suffering into what John Keats called "soul-making," Johnson offers readers a raw look at love and loss.

Jonathan Johnson’s previous works include the poetry books May Is an Island; Mastodon, 80% Complete; and In the Land We Imagined Ourselves; the memoir Hannah and the Mountain; and the play Ode. His poems have been published widely in magazines, anthologized in Best American Poetry, and read on NPR.

In The Desk on the Sea, Jonathan Johnson gently guides us through his family’s year living in Scotland. This reflective memoir offers much wisdom and humility as Johnson weaves the past—mourning his dead mother—through the present—his love for his wife and daughter—in a compelling meditation on many of the large issues we all struggle with as we navigate our own journeys.

Johnson writes with an urgent tenderness born of grief. His quest for meaning after the too-soon death of his beloved mother takes him back to her ancestral land, where, as a husband and a father, he struggles to embrace her instruction to ‘look, notice, love.’ A broken-hearted lament that grows toward celebration, The Desk on the Sea is a poignant and moving story of endurance and hope—a map for how we might all find our way home.

– Kim Barnes, author of In the Wilderness: Coming of Age in Unknown Country

In this graceful book, Johnson chronicles a year in Scotland with his family as they grieve the loss of his mother. He deftly navigates the landscape of grief, of intention and imagination, seeking the 'glorious ordinary' in a world that no longer contains his mother, but a world that contains his beloved daughter. Perhaps, he decides, what is important is not what we leave behind, but what we take with us.

– Karen Babine, author of All the Wild Hungers: A Season of Cooking and Cancer

"A Day in the Life" -- that is my subtitle for this sincere memoir. It chronicles Johnson’s yearlong sabbatical living with his wife and eight-year-old daughter in a seventeenth century stone cottage in Scotland. The consistent lighthouse beacon and the water and waves permeate their lives. The village culture eventually seeps in. Johnson has come here to write and honor the life and death of his beloved mother. His wife finds friends and meaningful volunteer work in the village, and their daughter is enrolled in school. If you happen to live on Lake Superior in Marquette, Michigan the home-town aspects ring especially true. Even if you call elsewhere home you may recognize many of these words and feelings as your own. Raising a child, caring for a dying parent, sustaining meaningful work, finding family-these are the actions that make a life. This memoir is steeped in grief and elevated by wonder.

It’s been four years since American poet Jonathon Johnson released his mother’s ashes across her hallowed Lake Superior. In an attempt to process the grief of her death, Johnson moves his wife and young daughter into a 17th-century cottage on the barren coast of Scotland’s North Sea. As Johnson chronicles his grief journey through this raw and moving memoir, he begins to shape a new life goal: to be a father, husband, and poet who honors and embodies his mother’s legacy.

An erudite, compelling, and intensely personal account, "The Desk On The Sea" is one of those personal stories that will linger in the mind andmemory long after it is completed and set back upon the shelf.