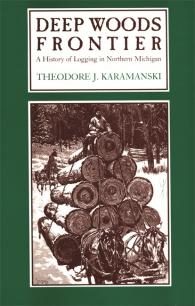 A History of Logging in Northern Michigan

In Deep Woods Frontier, Theodore J. Karamanski examines the interplay between men and technology in the lumbering of Michigan's rugged Upper Peninsula.

Three distinct periods emerged as the industry evolved. The pine era was a rough pioneering time when trees were felled by axe and floated to ports where logs were loaded on schooners for shipment to large cities. When the bulk of the pine forests had been cut, other entrepreneurs saw opportunity in the unexploited stands of maple and birch and harnessed the railroad to transport logs. Finally, in the pulpwood era, "weed trees," despised by previous loggers, are cut by chain saw, and moved by skidder and truck.

Narrating the history of Michigan's forest industry, Karamanski provides a dynamic study of an important part of the Upper Peninsula's economy.

Theodore J. Karamanski si an associate professor of history and directs the Program in Public History at Loyola Univeristy, where he received his Ph.D. In addition to articles on logging, the fur trade and on Arctic and Antarctic exploration, he is the author of Fur Trade and Exploration.

2 days 42 min ago
Now a National Jewish Book Award Finalist! @JewishBook https://t.co/qTKAeUEPVX
2 days 4 hours ago
RT @Steph_Steinberg: Tomorrow @ 7 p.m.! Join me and @DETWritingRoom at The Whitney for our first #2023AuthorSeries event ft. @waynestate… https://t.co/pssbi2NLNs
6 days 5 hours ago
SAVE THE DATE! Join author Desiree Cooper and illustrator Bec Sloane this Saturday for a behind the scenes look at… https://t.co/cKDBmbewOa