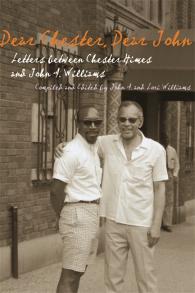 Letters between Chester Himes and John A. Williams

Compiled and Edited by John A. and Lori Williams

Dramatically entertaining as well as educational, this book casts invaluable light on a crucial slice of American literary history in the twentieth century.

Chester Himes and John A. Williams met in 1961, as Himes was on the cusp of transcontinental celebrity and Williams, sixteen years his junior, was just beginning his writing career. Both men would go on to receive international acclaim for their work, including Himes’s Harlem detective novels featuring Grave Digger Jones and Coffin Ed Johnson and Williams’s major novels The Man Who Cried I Am, Captain Blackman, and Clifford’s Blues. Dear Chester, Dear John is a landmark collection of correspondence between these two friends, presenting nearly three decades worth of letters about their lives and loves, their professional and personal challenges, and their reflections on society in the United States and abroad.

Prepared by John A. Williams and his wife, Lori Williams, this collection contains rare and personal glimpses into the lives of Williams and Himes between 1962 and 1987. As the writers find increasing professional success and recognition, they share candid assessments of each others’ work and also discuss the numerous pitfalls they faced as African American writers in the publishing world. The letters offer a window into Himes’s and Williams’s personalities, as the elder writer reveals his notoriously difficult and suspicious streak, and Williams betrays both immense affection and frustration in dealing with his old friend. Despite several rifts in their relationship, Williams’s concern for Himes’s failing health ensured that the two kept in touch until Himes’s death.

Dear Chester, Dear John
is a heartfelt and informative collection that allows readers to step behind the scenes of a lifelong friendship between two important literary figures. Students and teachers of African American literature will enjoy this one-of-a-kind volume.

John A. Williams was the author of numerous books of fiction, nonfiction, and poetry. His critically acclaimed novels include Sissie, The Man Who Cried I Am, and Captain Blackman. From 1979 to 1994, Williams was the Paul Robeson Professor of English at Rutgers University.

Lori Williams is a graduate of Hunter College and was a production editor for many years in both magazine and book publishing. Following retirement, she became a freelance editor and proofreader.

Gentle and forgiving, John A. Williams endured trying as well as exhilarating moments in his long friendship with the tormented, often unpredictable Chester Himes. One rupture in their friendship, provoked by Himes, lasted several years. Both men, however, were prolific writers of lasting importance. They were also defiant observers, as proud black artists, of a publishing culture that often tried to thwart and mock their best efforts. Dramatically entertaining as well as educational, this book casts invaluable light on a crucial slice of American literary history in the twentieth century.

– Arnold Rampersad, Sara Hart Kimball Professor in the Humanities and cognizant dean for the humanities at Stanford University

Reading these letters, one is delighted to be in the company of two friends who truly like each other. One also feels the passionate excitement and richness of their intellect and creativity, their anger and joy. And by chance one learns a great deal about the publishing world. But most of all one learns what it is like in the 20th. century to be an African-American writer in America and Europe. The book is a treasure.

– Clarence Major, professor of English at the University of California-Davis and author of Dirty Bird Blues