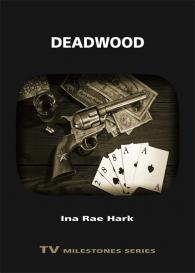 One of the best television series of the 2000s, Deadwood deserves this lively and thoughtful book. Ranging from language and violence to gender and race, Ina Rae Hark's Deadwood is a definitive account of why the Western matters today.

By dramatizing the intersection of self-interested capitalism and foundational violence in a mining camp in 1870s South Dakota, the HBO series Deadwood reinvented the television Western. In this volume, Ina Rae Hark examines the groundbreaking series from a variety of angles: its relationship to past iterations of the genre on the small screen; its production context, both within the HBO paradigm and as part of the oeuvre of its creator and showrunner David Milch; and its thematics. Hark’s comprehensive analysis also takes into account the series’ trademark use of language: both its unrelenting and ferocious obscenity and the brilliant complexity of its dialogue.

Hark argues that Deadwood dissolves several traditional binaries of the Western genre. She demonstrates that while the show appears to pit individuality, savagery, lawlessness, social regulation, and civilization against each other, its narrative shows that apparent opposites are often analogues, and these forces can morph into allies very quickly. Indeed, perhaps the show’s biggest paradox and most profound revelation is that self-interest and communitarianism cannot survive without each other. Hark closely analyzes Al Swearengen (as played by Ian McShane), the character who most embodies this paradox. A brutal cutthroat and purveyor of any vice that can turn him a profit, Swearengen nevertheless becomes the figure who forges connections among the camp’s disparate individuals and shepherds their growth into a community.

Deadwood is quintessentially, if unflatteringly, American in what it reveals about the dark underpinnings of national success rooted not in some renewed Eden but in a town that is, in the apt words of one of its promotional taglines, "a hell of a place to make your fortune." Fans of the show and scholars of television history will enjoy Hark’s analysis of Deadwood.

Ina Rae Hark is Distinguished Professor Emerita in English and Film/Media Studies at the University of South Carolina. She is also the author of Star Trek and editor of American Cinema of the 1930s: Themes and Variations, as well as the co-editor of The Road Movie Book and Screening the Male (both with Steven Cohan).

This richly contextualized and thoroughly illuminating study of Deadwood is the first comprehensive analysis of the first great Western of the twenty-first century. Drawing on her deep knowledge of the genre and television history, Ina Rae Hark scores a bull's-eye. She's the Annie Oakley of TV studies."

– Corey K. Creekmur, associate professor of English and film studies at the University of Iowa

One of the best television series of the 2000s, Deadwood deserves this lively and thoughtful book. Ranging from language and violence to gender and race, Ina Rae Hark's Deadwood is a definitive account of why the Western matters today."

– Daniel Worden, author of Masculine Style: The American West and Literary Modernism and assistant professor in the Department of English at the University of Colorado at Colorado Springs