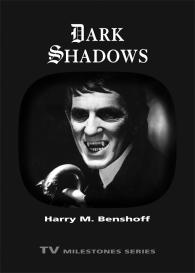 Benshoff provides a synoptic account of one of the most densely plotted of all daytime dramas, engages with much theoretical writing on the soap opera and Gothic genres, and provides new insights into the intersecting and often conflicting public tastes to which the program appeals. He does so with a deftness of touch that makes even complex ideas entertaining in a volume that could be enjoyed, but by no means exhausted, in a single evening.

While supernatural events have become fairly commonplace on daytime television in recent decades, Dark Shadows, which aired on ABC between 1966 and 1971, pioneered this format when it blended the vampires, werewolves, warlocks, and witches of fictional Collinsport, Maine, with standard soap opera fare like alcoholism, jealousy, and tangled love. In this volume, author Harry M. Benshoff examines Dark Shadows, both during its initial run and as an enduring cult phenomenon, to prove that the show was an important precursor—or even progenitor—of today’s phenomenally popular gothic and fantasy media franchises like Twilight, Harry Potter, and True Blood.

Benshoff demonstrates that viewers of all ages responded to the haunted world of Dark Shadows, making unlikely stars out of the show’s iconic characters—reluctant vampire Barnabas Collins, playboy werewolf Quentin Collins, vengeful witch Angelique DuVal, and vampire hunter Dr. Julia Hoffman. Benshoff explores the cultural and industrial contexts of the mid-1960s that gave rise to Dark Shadows and how the show adapted nineteenth-century gothic novels and twentieth-century horror films into a televised serial format. Benshoff also examines the unique aspects of the show’s casting and performance modes, its allure as a camp cult text, and the function of the show’s many secondary and tertiary texts—including novels, records, games, comic books, and the two feature films, House of Dark Shadows (1970) and Night of Dark Shadows (1971).

In the years since its cancellation, Dark Shadows’ enduring popularity has led to a prime-time NBC remake in the early 1990s, recent talk of a Tim Burton and Johnny Depp feature film, and a popular ongoing fan convention. Benshoff’s timely study of Dark Shadows will appeal to fans of the show and all film and television history scholars who are interested in the roots of one of today’s most popular genres.

Harry M. Benshoff is an associate professor in the department of Radio, TV, and Film at the University of North Texas. He is the author of Monsters in the Closet and co-author with Sean Griffin of Queer Images and America on Film.

Dark Shadows has everything: vampire Barnabas Collinwood as romantic but doomed hero; narrative complexity that almost beats Lost; counter-hegemonic family normativity; and tangled, hyperbolic actor/character relations. Harry Benshoff's intelligent and superbly informed account of this cult favorite teaches much about the gothic genre and the history of television. It is truly an enjoyable monograph."

– Janet Staiger, William P. Hobby Centennial Professor in Communication and Professor of Women’s and Gender Studies at the University of Texas and author of Political Emotions

Harry Benshoff's expert dissection and historically informed analysis of the 1960s cult TV show Dark Shadows balances the ardor of a fan and the sharp insights of a seasoned scholar. A program that played daily to millions of viewers for five years was more than a fluke or oddity and Benshoff gives its popularity long overdue context and illumination. Benshoff deftly describes and applies key theoretical concepts for analysis of the show's many facets, yet the writing remains witty, accessible, and engaging throughout."

– Rick Worland, professor in the Division of Cinema-Television at Southern Methodist University and author of The Horror Film: An Introduction

Benshoff provides a synoptic account of one of the most densely plotted of all daytime dramas, engages with much theoretical writing on the soap opera and Gothic genres, and provides new insights into the intersecting and often conflicting public tastes to which the program appeals. He does so with a deftness of touch that makes even complex ideas entertaining in a volume that could be enjoyed, but by no means exhausted, in a single evening."

– Kevin Heffernan, associate professor in the Division of Cinema-Television at Southern Methodist University

Double stigmatized as both a soap opera and one concerned with vampires, werewolves and witches, the original Dark Shadows television series has long been precluded from genuine critical reevaluation. So Harry M. Benshoff's insightful depth analysis of a show both beloved and ridiculed for more than a half century (and sometimes in equal parts by its most ardent admirers) is a revelation. With elegant skill, Benshoff unearths the series' richly complex social, sexual and psychological dimensions to illuminating conclusions. Ultimately, this meaningful investigation uncloaks the sources of how the Dark Shadows phenomenon continues to fascinate, frustrate and delight generations of viewers.

– Michael Orlando Yaccarino, genre film specialist and co-author of the biography Infinite Variety: The Life and Legend of the Marchesa Casati

2 days 28 min ago
Now a National Jewish Book Award Finalist! @JewishBook https://t.co/qTKAeUEPVX
2 days 3 hours ago
RT @Steph_Steinberg: Tomorrow @ 7 p.m.! Join me and @DETWritingRoom at The Whitney for our first #2023AuthorSeries event ft. @waynestate… https://t.co/pssbi2NLNs
6 days 5 hours ago
SAVE THE DATE! Join author Desiree Cooper and illustrator Bec Sloane this Saturday for a behind the scenes look at… https://t.co/cKDBmbewOa