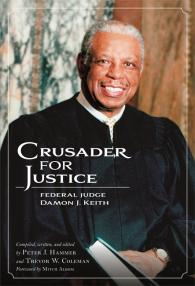 The Honorable Damon J. Keith was appointed to the federal bench in 1967 and has served as a judge on the United States Court of Appeals for the Sixth Circuit since 1977, where he has been an eloquent defender of civil and constitutional rights and a vigorous enforcer of civil rights law. In Crusader for Justice: Federal Judge Damon J. Keith, authors Peter J. Hammer and Trevor W. Coleman present the first ever biography of native Detroiter Judge Keith, surveying his education, important influences, major cases, and professional and personal commitments. Along the way, the authors consult a host of Keith's notable friends and colleagues, including former White House deputy counsel John Dean, Supreme Court Justice Clarence Thomas, and industrialist Edsel Ford II for this candid and comprehensive volume.

Hammer and Coleman trace Keith's early life, from his public school days in Detroit to his time serving in the segregated U.S. army and his law school years at Howard University at the dawn of the Civil Rights era. They reveal how Keith's passion for racial and social justice informed his career, as he became co-chairman of Michigan's first Civil Rights Commission and negotiated the politics of his appointment to the federal judiciary. The authors go on to detail Keith's most famous cases, including the Pontiac Busing and Hamtramck Housing cases, the 1977 Detroit Police affirmative action case, the so-called Keith Case (United States v. U.S. District Court), and the Detroit Free Press v. Ashcroft case in 2002. They also trace Keith's personal commitment to mentoring young black lawyers, provide a candid look behind the scenes at the dynamics and politics of the Sixth Circuit Court of Appeals, and even discuss some of Keith's difficult relationships, for instance with the Detroit NAACP and Supreme Court Justice Clarence Thomas.

Judge Keith's forty-five years on the bench offer a unique viewpoint on a tumultuous era of American and legal history. Readers interested in Civil Rights-era law, politics, and personalities will appreciate the portrait of Keith's fortitude and conviction in Crusader for Justice.

More information can be found at crusaderforjustice.com

Damon J. Keith was born in Detroit, Michigan, on July 4, 1922. He is a graduate of West Virginia State College
(B.A. 1943), Howard University Law School (J.D. 1949) and Wayne State University Law School (LL.M. 1956). In 1967, President Lyndon Johnson appointed Keith to the United States District Court for the Eastern District of Michigan,
where he ultimately served as chief judge. He was appointed to the United States Court of Appeals for the Sixth Circuit in 1977. As a member of the federal judiciary, Judge Keith has been a courageous defender of constitutional
rights, giving real meaning to the promise of "equal justice under law." Judge Keith is the recipient of numerous awards, most notably, the NAACP's highest honor, the Spingarn Medal, and the Edward J. Devitt Distinguished Service to Justice Award, the highest honor that can be bestowed on a member of the federal judiciary.

Trevor W. Coleman is a national award-winning journalist, who has been an editorial writer, and columnist for the Detroit Free Press. He was chief speechwriter for former Michigan governor Jennifer M. Granholm and director of communications for the Michigan Department of Civil Rights. He is a graduate of The Ohio State University and father of two college students, Sydnie and Trevor II.

Mitch Albom is an internationally renowned and best-selling author, journalist, screenwriter, playwright, radio and television broadcaster and musician. His books have collectively sold more than 35 million copies worldwide; have been published in forty-eight territories and in forty-four languages around the world; and have been made into Emmy Award-winning and critically-acclaimed television movies.

Crusader for Justice is about more than just a man; it's a story about the human spirit. It's about our thirst for justice, draped in a robe. Judge Keith is my judge, my mentor, my second father . . . but I'm not the only one who is grateful for his example. He is the nation's judge, the country's conscience, the people's decider. Anyone who cares about equal justice for all must read this book and give it to everyone who cares about all of our citizens, from the streetsweeper to the CEO. Judge Keith's example is a gift—a man with a backbone of steel and the heart of a lion. Crusader for Justice gets my vote for the best legal biography of the year.

No one will ever forget Judge Keith's bold declaration in Detroit Free Press v. Ashcroft: 'Democracies die behind closed doors.' Nor will they forget his contributions to achieving social justice and racial justice through his decisions involving discrimination, national security, and civil liberties. Judge Keith came from humble roots in Detroit. Having suffered racial injustice first hand, he had the bravery to take the phrase 'equal justice under law' literally. Life experience matters, which is why diversity on the bench cannot be forsaken. Crusader for Justice, above all else, is a story of judicial courage-the story of a man unafraid to do what he knew was right.

In Crusader for Justice, readers are instantly drawn into the life of Federal Judge Damon J. Keith. Step by step, the authors reveal Damon Keith's experiences and challenges growing up in Detroit during avery racially unjust and charged period of time, and they give a poignant view of what Judge Keith actually overcame in his quest to first become an advocate for human rights for every person through his tenure as a judge . . . This book shows that one person can make a difference in helping lay the groundwork to set aside racial prejudices by treating people with compassion and respect.

To a large extent, this book illuminates essential aspects of Keith’s judicial decisions. It is a must-read for all law students, and for anyone interested in civil rights history. The chapters focused on famous cases provide insight into the reasoning of affirmative action, and sound understanding of the role of the judiciary in the balance of power in government and society.

In Crusader for Justice, Peter J. Hammer and Trevor W. Coleman show the Judge Damon Keith I know—his deep humanity, his courage on the bench, and his unyielding commitment to justice and fairness for all Americans, regardless of race or stature. This book shows the mind and soul behind the decisions that have guarded our civil liberties, enlarged our civil rights, and made America a better place for all its citizens.

5 hours 35 min ago
Happy Pub Date! HOUSE AND HOME is a collection of poems that intensely explore the beauty & wisdom to be found in w… https://t.co/MYnkKJxcrx
2 days 7 hours ago
Join WSU President M. Roy Wilson for a book talk next Wednesday! Copies of his memoir will be available for sale a… https://t.co/6q5w5dtFtu
4 days 7 hours ago
TONIGHT! Join @stephanie_heit at @ShopBooksweet for local author's night! https://t.co/pTny5OErDe