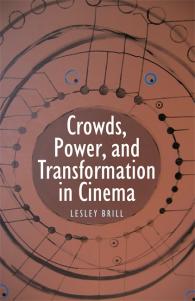 Crowds, Power, and Transformation in Cinema

From Intolerance to The Silence of the Lambs, motion pictures show crowds and power in complex, usually antagonistic, relationships. Key to understanding this opposition is an intrinsic capability of the cinema: transformation. Making unprecedented use of Elias Canetti's Crowds and Power, Lesley Brill explores crowds, power, and transformation throughout film history.

The formation of crowds together with crowd symbols and representations of power create complex, unifying structures in two early masterpieces, The Battleship Potemkin and Intolerance. In Throne of Blood, power-seekers become increasingly isolated, while the crowd of the dead seduces and overwhelms the living. The conflict between crowds and power in Citizen Kane takes place both within the protagonist and between him and the people he tries to master. North by Northwest, Killer of Sheep, and The Silence of the Lambs are rich in hunting and predation and show the crowd as a pack; transformation—true, false, and failed—is the key to both attack and escape.

Brill's study provides original insights into canonical movies and shows anew the central importance of transformation in film. Film theorists, critics, and historians will value this fresh and intriguing approach to film classics, which also has much to say about cinema itself and its unique relationship to mass audiences.

It is a searching, thoughtful, and illuminating study, written with care and clarity by a leading film scholar and devoted to an area hitherto little explored in film studies. It will surely find wide readership among those interested in the art and the cultural significance of cinema."

At last, a gifted critic has applied the ideas in Elias Canetti's Crowds and Power to the study of cinema. Writers on modernity have long associated movies with crowds, but thanks to Lesley Brill we have a full and sophisticated analysis of that relationship. This book is valuable not only as an original commentary on famous films but also as an intelligent introduction to Canetti's unusual and important work."

This is a provocative and original book-the first sustained analysis of the important role crowds play in films. Brill builds upon the powerful intellectual theories of Elias Canetti, transforming Canetti's philosophical meditations into tools for revealing intricate cinematic structures."

10 hours 18 min ago
In honor of the #CityofDetroit turning 321 years old on July 24th, WSUPress will be showcasing one Detroit Book of… https://t.co/PA7nONh4C0
15 hours 21 min ago
OUR FALL & WINTER 2022 TITLES ARE NOW AVAILABLE FOR PRE-ORDER! Grab your copy of any of our fall & winter titles f… https://t.co/qDykAsF9sk
2 days 16 hours ago
Happy Pub Date to THE SPOOK WHO SAT BY THE DOOR, SECOND EDITION! This new edition of a literary classic now includ… https://t.co/XrCsLZvf4D