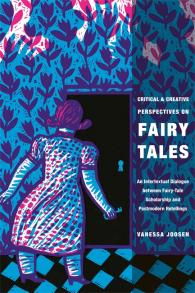 An Intertextual Dialogue between Fairy-Tale Scholarship and Postmodern Retellings

Critical and Creative Perspectives on Fairy Tales provides an interesting and new angle on the interpretation of fairy tales, covers important topics and texts, and provides useful and balanced analyses.

In Critical and Creative Perspectives on Fairy Tales: An Intertextual Dialogue between Fairy-Tale Scholarship and Postmodern Retellings Vanessa Joosen broadens the traditional concept of intertextuality to include academic texts. With three key texts from the 1970s at the center of her discussion-Marcia K. Lieberman's "Some Day My Prince Will Come," Bruno Bettelheim's The Uses of Enchantment, and Sandra Gilbert and Susan Gubar's The Madwoman in the Attic-Joosen connects the critical views expressed in these feminist and psychoanalytic interpretations with fictional fairy-tale retellings and illustrations that have been published in Dutch, English, and German since the 1970s.

Joosen argues that retellings and criticism participate in a continuous and dynamic dialogue about the traditional fairy tale, but on different terms. Critical and Creative Perspectives on Fairy Tales offers many insights into the workings of fiction and criticism that will appeal to fairy-tale scholars, literature scholars, and general readers interested in intertextuality and fairy tales.

Vanessa Joosen is a researcher and lecturer in children's literature at the University of Antwerp, Belgium. She has contributed to Marvels and Tales, The Greenwood Encyclopedia of Folktales and Fairy Tales, and The Oxford Companion to Children's Literature.

Critical and Creative Perspectives on Fairy Tales is a perfect marriage of criticism and metacriticism-an approach that challenges conventional thinking. Joosen does not simply follow the best traditions of fairy-tale studies, she brings them to a new level of sophistication that stretches far beyond the domain of fairy tales as such and into the intricacies of literary and cultural theory. Beautifully written, captivating, and truly enjoyable for scholars and fairy-tale lovers equally, this book will be referred to for many years to come."

– Maria Nikolajeva, professor of education at the University of Cambridge and author of Power, Voice and Subjectivity in Literature for Young Readers

Critical and Creative Perspectives on Fairy Tales provides an interesting and new angle on the interpretation of fairy tales, covers important topics and texts, and provides useful and balanced analyses.

– Cristina Bacchilega, professor of English at the University of Hawai’i

Critical and Creative Perspectives on Fairy Tales as a whole is well-written, with a clear and readable style that will appeal to both scholars and students of the subject, as well as to a more general readership. A well-researched work, the extensive notes and bibliography to Joosens text provide a rich source of background reading, while the volume itself will no doubt prove an invaluable resource in the future of both fairy-tale and childrens literature studies.

As Vanessa Joosen demonstrates, a renaissance of fairy-tale criticism and retellings that began in North America and Europe during the 1970s has flourished to the present. Her book is the first comprehensive study to focus on the major critical works, intertextual references, and scholarly debates that have invigorated the hybrid genre of fairy tale. Joosen succeeds in shedding new light on the overlap between fairy-tale re-creations and critical analyses without privileging one over the other."

– Jack Zipes, professor emeritus of German and Comparative Literature at University of Minnesota and author of The Enchanted Screen: The Unknown History of the Fairy-Tale Film

Vanessa Joosen brings an invigorating new approach to the field of fairy tales. Her innovative study of the relationship between the discourses of scholarship and fiction as an intertextual dialogue brings new insights to both. This engagingly written book will be an indispensable addition to library collections and an invaluable reference work for scholars, students, and all those interested in fairy tales and children's literature."

Joosen has written a dazzling gem of a book, which illuminates both the literary strategy of intertextuality and the tradition of fairy tales. . . . Joosen's study is bound to become one of the standards of fairy-tale scholarship. Summing Up: Essential.

Vanessa Joosen's Critical and Creative Perspectives on Fairy Tales is an essential addition to any fairy-tale scholar's library and is, moreover, a fascinating read. This is a text to savor, a text to open up new worlds and new ways of thinking.

In Critical and Creative Perspectives on Fairy Tales, Joosen's fondness for fairy tales and her appreciation of their place in postmodern literature combine with a rigorous scholarly examination of the ways in which fairy-tale retellings are influenced by literary criticism. . . It takes great skill and discipline to control so complex an argument without digressing, but Joosen clearly has what it takes to move through her material in a coherent, well-paced manner.