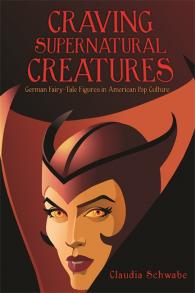 Craving Supernatural Creatures: German Fairy-Tale Figures in American Pop Culture analyzes supernatural creatures in order to demonstrate how German fairy tales treat difference, alterity, and Otherness with terror, distance, and negativity, whereas contemporary North American popular culture adaptations navigate diversity by humanizing and redeeming such figures. This trend of transformation reflects a greater tolerance of other marginalized groups (in regard to race, ethnicity, ability, age, gender, sexual orientation, social class, religion, etc.) and acceptance of diversity in society today. The fairy-tale adaptations examined here are more than just twists on old stories—they serve as the looking glasses of significant cultural trends, customs, and social challenges. Whereas the fairy-tale adaptations that Claudia Schwabe analyzes suggest that Otherness can and should be fully embraced, they also highlight the gap that still exists between the representation and the reality of embracing diversity wholeheartedly in twenty-first-century America.

The book’s four chapters are structured around different supernatural creatures, beginning in chapter 1 with Schwabe’s examination of the automaton, the golem, and the doppelganger, which emerged as popular figures in Germany in the early nineteenth century, and how media, such as Edward Scissorhands and Sleepy Hollow, dramatize, humanize, and infantilize these "uncanny" characters in multifaceted ways. Chapter 2 foregrounds the popular figures of the evil queen and witch in contemporary retellings of the Grimms’ fairy tale "Snow White." Chapter 3 deconstructs the concept of the monstrous Other in fairy tales by scrutinizing the figure of the Big Bad Wolf in popular culture, including Once Upon a Time and the Fables comic book series. In chapter 4, Schwabe explores the fairy-tale dwarf, claiming that adaptations today emphasize the diversity of dwarves' personalities and celebrate the potency of their physicality.

Craving Supernatural Creatures is a unique contribution to the field of fairy-tale studies and is essential reading for students, scholars, and pop-culture aficionados alike.

Claudia Schwabe is associate professor of German at Utah State University. She is also the co-editor of New Approaches to Teaching Folk and Fairy Tales and editor of The Fairy Tale and Its Uses in Contemporary New Media and Popular Culture.

Schwabe finds fairy-tale media, merchandise, and storytelling in everyday situations. Her insightful analysis demonstrates how to draw research questions directly from these observations. The accessible style makes this a compelling book for all who know these contemporary creatures, but not yet in light of diversity issues and historical contexts.

Schwabe’s unique study explores the commodification of major classical fairy tales with important insights regarding our ‘appetites’ for these stories. Her work reveals just how deeply fairy-tale figures and motifs are embedded in American culture. Moreover, her findings are highly significant for how fairy tales form the basis of most popular cultures throughout the world.

Craving Supernatural Creatures, as fun as it is smart, makes the compelling argument that recent fairy-tale media recast ideas about the Other, advocating the value of diversity. Schwabe’s purview includes American fairy-tale films, television, and other media, along with helpful backgrounding discussions of the mainly German literary antecedents. A focus on characters—automatons, golems, doppelgangers, villains, wolves, and dwarfs—means that though the author considers the usual suspects, she also extends her work to less well-known American examples, including some that might not immediately strike most people as fairy-tale inspired works.

There is a lot of ground covered in each chapter: the multiple German fairy tales she describes, the timeline she traces for similar images and tropes, her detailed analysis of media, and the related movies and television shows she references. All of this will be helpful for a newcomer to the topic and to students. Schwabe’s work is a detailed, comprehensive addition to the field, and it is a good contribution on these topics and themes.

Though the book is likely to appeal most to those who seek out the kind of works that carefully analyze popular cultural texts, Schwabe’s presentation of those texts also has the potential to spark the curiosity of a reader with a more casual interest in fairy-tale adaptations. For scholars with a particular interest in the portrayal of supernatural creatures in popular culture, the text is an invaluable reference. As fairytales continue to captivate the North American imagination through a seemingly endless supply of supernatural narratives, Claudia Schwabe helps us all to understand why we crave supernatural creatures.

The careful and painstaking work that needs to be done to properly represent the many layers behind the German fairy tale characters of American pop culture takes time and we are thus grateful to have this examination enter the field. Schwabe lays out her analysis clearly and presents the interactions of these complicated structures in a way that is useful to scholars and students. Schwabe’s best analysis of the work peels back the intertextual and intercultural layers to demonstrate this unique and ever-expanding relationship.

Craving Supernatural Creatures provides an interesting and engaging study and comparison between monstrous creatures from German folklore and their transformed counterparts in contemporary American media productions....Schwabe’s writing is clear and accessible to a wide range of readers. The book may be of interest to non-academic readers and fans of the shows she discusses, such as Once Upon a Time. Student researchers will find a great deal of interesting material.

In Craving Supernatural Creatures: German Fairy-Tale Figures in American Pop Culture, Claudia Schwabe persuasively counters Jack Zipes’s lament that mass media retellings of fairy tales exploit the long history and power of the stories to the tales’ detriment. Rather, she argues, reinterpretations of differ- ence and Otherness and the redemption or humanization of the monsters and villains of German folklore in North American mass media productions point to a cultural shift toward embracing diversity as a positive trait rather than something to be feared.

2 days 22 min ago
Now a National Jewish Book Award Finalist! @JewishBook https://t.co/qTKAeUEPVX
2 days 3 hours ago
RT @Steph_Steinberg: Tomorrow @ 7 p.m.! Join me and @DETWritingRoom at The Whitney for our first #2023AuthorSeries event ft. @waynestate… https://t.co/pssbi2NLNs
6 days 5 hours ago
SAVE THE DATE! Join author Desiree Cooper and illustrator Bec Sloane this Saturday for a behind the scenes look at… https://t.co/cKDBmbewOa