Home » Books » Before the Crash 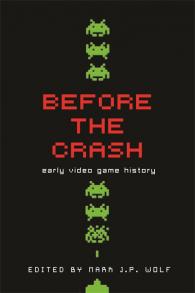 Before the Crash is fascinating reading and provides valuable service to the entire game studies field by presenting detailed analyses of early video game culture.

Following the first appearance of arcade video games in 1971 and home video game systems in 1972, the commercial video game market was exuberant with fast-paced innovation and profit. New games, gaming systems, and technologies flooded into the market until around 1983, when sales of home game systems dropped, thousands of arcades closed, and major video game makers suffered steep losses or left the market altogether. In Before the Crash: Early Video Game History, editor Mark J. P. Wolf assembles essays that examine the fleeting golden age of video games, an era sometimes overlooked for older games’ lack of availability or their perceived "primitiveness" when compared to contemporary video games.

In twelve chapters, contributors consider much of what was going on during the pre-crash era: arcade games, home game consoles, home computer games, handheld games, and even early online games. The technologies of early video games are investigated, as well as the cultural context of the early period—from aesthetic, economic, industrial, and legal perspectives. Since the video game industry and culture got their start and found their form in this era, these years shaped much of what video games would come to be. This volume of early history, then, not only helps readers to understand the pre-crash era, but also reveals much about the present state of the industry.

Before the Crash will give readers a thorough overview of the early days of video games along with a sense of the optimism, enthusiasm, and excitement of those times. Students and teachers of media studies will enjoy this compelling volume.

One of our preeminent video game scholars, Wolf continues to break new ground with this fascinating collection."

Before the Crash is fascinating reading and provides valuable service to the entire game studies field by presenting detailed analyses of early video game culture. Covering the production, economics, and gameplay of video games produced in the 1970s and early 1980s, this book proves the value of historical perspective for understanding the basis of the present digital lifestyle. A leading academics in game history and professionals who themselves participated in the creation of the games industry, the authors bring together an impressive body of expertise from this important field.

– Frans Mayra, professor of digital culture and game studies at University of Tampere

"Finally, a book of scholarship on video games that acknowledges that they were made before World of Warcraft, The Sims, and Tomb Raider! This book offers insight into the design and technical history of games and systems you should be embarrassed not to know more about."

– Ian Bogost, professor of digital media at Georgia Institute of Technology and co-author of Racing the Beam: The Atari Video Computer System

In this smart volume on the early history of video games, the authors admit to their feelings of nostalgia, while bringing us new insights about old games and game hardware.

The variety of subject matter in Before the Crash is truly impressive, offering deep (relative to the subject matter), insightful commentary on such divergent topics as reading the Atari catalog, early video game audio, 'The Rise and Fall of Cinematronics,' the Fairchild Channel F system (20 pages on the vilified progenitor of the Atari VCS!), and early online gaming in the form of BBSs and MUDs.