Home » Books » From Court to Forest 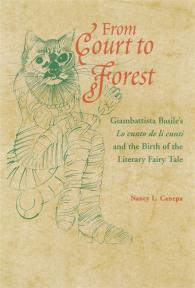 From Court to Forest

From Court to Forest is a critical and historical study of the beginnings of the modern literary fairy tale. Giambattista Basile's Lo cunto de Ii cunti written in Neapolitan dialect and published in 1634-36, comprises fifty fairy tales and was the first integral collection of literary fairy tales to appear in Western Europe. It contains some of the best known fairy-tales types, such as Sleeping Beauty, Puss in Boots, Cinderella, and others, many in their earliest versions. Although it became a central reference point for subsequent fairy tale writers, such as Perrault and the Grimms, as well as a treasure chest for folklorists, Lo cunto de Ii cunti has had relatively little attention devoted to it by literary scholars.

Lo cunto constituted a culmination of the erudite interest in popular culture and folk traditions that permeated the Renaissance. But even if Basile drew from the oral tradition, he did not merely transcribe the popular materials he heard and gathered around Naples and in his travels. He transformed them into original tales distinguished by vertiginous rhetorical play, abundant representations of the rituals of everyday life and the popular culture of the time, and a subtext of playful critique of courtly culture and the canonical literary tradition.

This work fills a gap in fairy-tale and Italian literary studies through its rediscovery of one of the most important authors of the Italian Baroque and the genre of the literary fairy tale.

Nancy L. Canepa is an associate professor of French and Italian at Dartmouth College. She is the author of Out of the Woods: The Origins of the Literary Fairy Tale in Italy and France.

10 hours 54 min ago
In honor of the #CityofDetroit turning 321 years old on July 24th, WSUPress will be showcasing one Detroit Book of… https://t.co/PA7nONh4C0
15 hours 57 min ago
OUR FALL & WINTER 2022 TITLES ARE NOW AVAILABLE FOR PRE-ORDER! Grab your copy of any of our fall & winter titles f… https://t.co/qDykAsF9sk
2 days 17 hours ago
Happy Pub Date to THE SPOOK WHO SAT BY THE DOOR, SECOND EDITION! This new edition of a literary classic now includ… https://t.co/XrCsLZvf4D