Home » Books » The Construction of Testimony 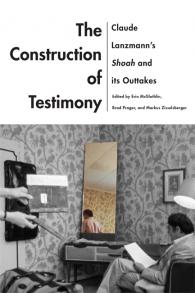 The Construction of Testimony

Claude Lanzmann’s Shoah and Its Outtakes

In The Construction of Testimony: Claude Lanzmann’s Shoah and Its Outtakes, editors Erin McGlothlin, Brad Prager, and Markus Zisselsberger gather contributions on how Shoah (1985) fundamentally changed the nature and use of filmed testimony and laid the groundwork for how historians and documentarians regard and understand the history of the Holocaust. Critics have taken long note of Shoah’s innovative style and its place in the history of documentary film and in cultural memory, but few scholars have touched on its extensive outtakes and the reams of documentation archived at the United States Holocaust Memorial Museum and at Yad Vashem, or the release of five feature-length documentaries based on the material in those outtakes.

The Construction of Testimony, which contains thirteen essays by some of the most notable scholars in Holocaust film studies, reexamines Lanzmann’s body of work, his film, and the impact of Shoah through this trove—over 220 hours—of previously unavailable and unexplored footage. Responding to the need for a sustained examination of Lanzmann’s impact on historical and filmic approaches to testimony, this volume inaugurates a new era of scholarship, one that takes a critical position vis-à-vis the filmmaker’s posturing, stylization, and editorial sleight-of-hand. The volume’s contributors engage with a range of dimensions central to Lanzmann’s filmography and the outtakes, including the dynamics of gender in his work, his representation of Nazi perpetrators, and complex issues of language and translation.

In light of Lanzmann’s invention of a radically new form of witnessing and remembrance, Shoah laid the framework for the ways in which subsequent filmmakers have represented the Holocaust cinematically; at the same time, the outtakes complicate this framework by revealing new details about the filmmaker’s complex editorial choices. Scholars and students of film studies and Holocaust studies will value this close analysis.

Erin McGlothlin is associate professor of German and Jewish studies at Washington University in St. Louis. She is the author of Second-Generation Holocaust Literature: Legacies of Survival and Perpetration and editor of Persistent Legacy: The Holocaust and German Studies (coedited with Jennifer Kapczynski).

Brad Prager is professor of film studies and German studies at the University of Missouri. He is the author of After the Fact: The Holocaust in Twenty-First Century Documentary Film and The Cinema of Werner Herzog: Aesthetic Ecstasy and Truth.

Markus Zisselsberger teaches English at St. Frances Academy in Baltimore. He is the editor of The Undiscover’d Country: W. G. Sebald and the Poetics of Travel and "If we had the word." Ingeborg Bachmann: Views and Reviews (coedited with Gisela Brinker-Gabler).

There were some 220 hours of ‘outtakes’ that never made it into the 9 1/2 hours of Lanzmann’s monumental film. Lanzmann stated that he was tempted to destroy this filmic material because such a drastic gesture ‘would prove that Shoah is not a documentary.’ This was a bizarre tribute to ‘art’ along with the supposed control over it by the ‘auteur.’ It was also an insistence on a misleading binary logic that obscured the documentary and referential dimensions along with the role of many co-makers (notably, women and disparaged Polish interlocutors), as well as the nature of Lanzmann’s and his chief editor Ziva Postec’s own at times problematic and extensive editing of a film that disclosed much to its viewers about the genocidal effort of the Nazis and its effects on victims and survivors. The archive of what the editors aptly term the ‘not-yet-edited’ and the ‘never-to-be-edited’ raises important questions about the bases of Lanzmann’s decisions as well as his preferred method of eliciting or provoking traumatic reenactment. Readers may of course disagree about which contributions display the most critical insight, but they are all worth careful study and reveal how the film was not simply Lanzmann’s but the product of many human, sometimes all-too-human hands. Construction of Testimony is an extremely valuable book that does not undermine the status of, but does critically analyze and situate dialogically an ‘iconic’ film whose artistry is evident but whose paths not taken may still stimulate both aesthetic and historical inquiry for its viewers and commentators.

This superb anthology offers provocative new insights into Claude Lanzmann’s pioneering testimonial project. The authors’ close studies of the Shoah outtakes provide revelations on nearly every page of their complex, lucidly argued, at times incisively critical essays. Any future assessments of Lanzmann’s achievement will depend on this essential collection.

Viewers of Lanzmann’s Shoah will find these sharp analyses of its outtakes illuminating, revelatory, and necessary for a re-evaluation of the film, of its director, and of the work of witness testimony more broadly. This book signals a new phase in the visual history of the Holocaust.

– Marianne Hirsch, author of The Generation of Postmemory: Writing and Visual Culture After the Holocaust

Until the publication of The Construction of Testimony we couldn’t have known that Lanzmann’s monumental nine-and-a-half-hour film is but the tip of the iceberg. Readers can for the first time learn about the 220 additional hours of footage shot and the films Lanzmann made from them. The book shows that the very notion of ‘outtake’ for a documentary opus such as Shoah is a misnomer; more accurately these 220 hours, now held by the National Holocaust Memorial Museum, constitute the ‘not yet used.’ This is an indispensable book for all those who watch, teach, or hope to comprehend Lanzmann’s landmark achievement.

– Michael Renov, Haskell Wexler Chair in Documentary at the USC School of Cinematic Arts and author of The Subject of Documentary

[This] incisive analy[sis] of the outtakes do much more than to give us insights into the changing goals, complex choices, and momentous omissions that determine this landmark film. [ . . . ] [It] carefully demonstrate, the outtakes contest the vision of the Holocaust, of testimony, and of the act of witness that Shoah, through these and other iconic moments, has been influential in shaping over the last 35 years.

Here in one central source, the reader is presented with an essential companion to fully appreciate Claude Lanzmann’s now classic film.

The Construction of Testimony is proof positive that we must no longer assume the veracity of everything we see (and hear) in the original Shoah. There’s no denying the film’s artistic and historical significance, but it is ultimately a piece of a far richer, unfiltered puzzle. Indeed, Lanzmann’s most significant contribution may not be any one of his acclaimed documentaries, but his collection of unaltered interviews, which were very nearly lost before USHMM acquired and preserved them. This powerful anthology illustrates how the archives are so much more than mere outtakes; they comprise an essential body of historical material, one which must continue to survive for posterity.

This outstanding volume brings together a rich body of scholarship on the Claude Lanzmann Shoah Collection, which has been digitally archived at the United States Holocaust Memorial Museum (USHMM) and consists of 220 hours of unedited interview and location outtakes as well as sound tapes, interview summaries, and 7,300 pages of original transcripts....Bringing Lanzmann’s multifaceted mode of production to light—thus reading Shoah against the intent of the filmmaker—this superb publication demonstrates that Lanzmann was even more of a maverick than he (re)presented himself to be.

The Construction of Testimony admirably begins the process of opening some of the many portals into the seemingly seamless, closed system of self-proclaimed auteur Claude Lanzmann’s Shoah that the construction of the USHMM’s Claude Lanzmann Shoah Collection has made possible.

With dexterity and creative panache, The Construction of Testimony takes Lanzmann to task using equal parts respect and defiance, showcasing the significance of his artistic construction of an aesthetics of death and mourning while opening up new modes of understanding how narratives of resilience and survival structure and construct testimony.