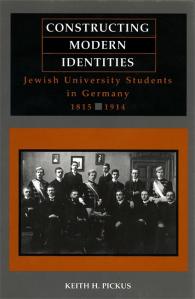 The emergence of Jewish student associations in 1881 provided a forum for Jews to openly proclaim their religious heritage. By examining the lives and social dynamics of Jewish university students, Keith Pickus shows how German Jews rearranged their self-images and redefined what it meant to be Jewish. Not only did the identities crafted by these students enable them to actively participate in German society, they also left an indelible imprint on contemporary Jewish culture. Pickus's portrayal of the mutability and social function of Jewish self-definition challenges previous scholarship that depicts Jewish identity as a static ideological phenomenon. By illuminating how identities fluctuated throughout life, he demonstrates that adjusting one's social relationships to accommodate the Gentile and Jewish worlds became the norm rather than the exception for 19th-century German Jews.

Keith H. Pickus was Vvce Ppesident for Corporate and Foundation Relations at Wichita State University and the author of Our Only Hope: Eddie's Holocaust Story and the Weisz Family Correspondence.