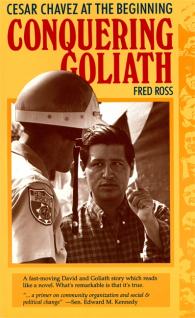 Cesar Chavez at the Beginning

Fred Ross, a living legend among those who work to empower the underdog and effect social change by means of grass-roots activism, tells the story of Cesar Chavez's first organizing effort. This is a fast-moving chronicle of a little-known battle pitting Chavez and a handful of farm workers against two hundred growers and powerful govrenment agencies in 1958, which led, four years later, to the launching of the United Farm Workers of America.
Conquering Goliath illustrates Chavez's skill in calling attention to the plight of farm workers and in drawing people together in order to end discrimination and economic exploitation. In an against-all-odds triumph, he worked within the system, cultivating honest governement officials, documenting abuses, conducting citizenship classes, registering voters, and ultimately, restoring human dignity by defeating a grossly unjust practice.

2 days 17 min ago
Now a National Jewish Book Award Finalist! @JewishBook https://t.co/qTKAeUEPVX
2 days 3 hours ago
RT @Steph_Steinberg: Tomorrow @ 7 p.m.! Join me and @DETWritingRoom at The Whitney for our first #2023AuthorSeries event ft. @waynestate… https://t.co/pssbi2NLNs
6 days 5 hours ago
SAVE THE DATE! Join author Desiree Cooper and illustrator Bec Sloane this Saturday for a behind the scenes look at… https://t.co/cKDBmbewOa