Home » Books » The Concept of Self 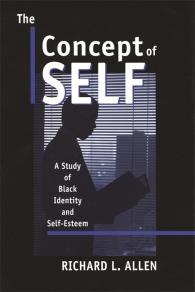 The Concept of Self

A Study of Black Identity and Self-Esteem

[This] illuminating and beneficial text . . . will prove foundational to all future constructions of a psychology of the Black experience.

Institutional racism has had a major impact on the development of African American self-esteem and group identity. Through the years, African Americans have developed strong, tenacious concepts of self partially based on African cultural and philosophical retentions and as a reaction to historical injustices. The Concept of Self examines the historical basis for the widely misunderstood ideas of how African Americans think of themselves individually, and how they relate to being part of a group that has been subjected to challenges of their very humanity.

Richard Allen examines past scholarship on African American identity to explore a wide range of issues leading to the formation of an individual and collective sense of self. Allen traces the significance of social forces that have impinged on the lives of African Americans and points to the uniqueness of their position in American society. He then focuses on the results from the National Survey of Black Americans-a national survey of African Americans on a wide range of political, social, and psychological issues-to develop a model of African self. Allen explores the idea of double-consciousness as put forth by W.E.B. DuBois against the more recent debates of Afrocentricity or an African-centered consciousness. He proposes a set of interrelated hypotheses regarding how African Americans might use an African worldview for the upliftment of Africans in the Diaspora.

The Concept of Self will interest students and scholars of African American studies, sociology and population studies.

A richly detailed examination of empirical and theoretical formulations that give vital coherence to current explorations of the Black self-concept . . . . [This] illuminating and beneficial text . . . will prove foundational to all future constructions of a psychology of the Black experience.

[This book] provides a provocative, scholarly, and theoretical springboard for other activist-scholars to seek ways of exploring and navigating the journey of a people whose ancestors survived the Middle Passage.

Richard Allen provides a thorough investigation of the African American self.

13 hours 28 min ago
DETROIT BOOK OF THE DAY: DAY 1 THE DETROIT SYMPHONY ORCHESTRA details the history of the @DetroitSymphony as seen… https://t.co/7zpUnVRwiw
1 day 7 hours ago
In honor of the #CityofDetroit turning 321 years old on July 24th, WSUPress will be showcasing one Detroit Book of… https://t.co/PA7nONh4C0
1 day 13 hours ago
OUR FALL & WINTER 2022 TITLES ARE NOW AVAILABLE FOR PRE-ORDER! Grab your copy of any of our fall & winter titles f… https://t.co/qDykAsF9sk