Home » Books » The Compromise of Return 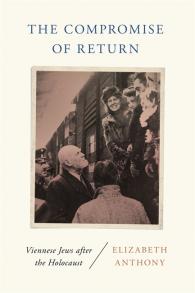 The Compromise of Return

Viennese Jews after the Holocaust

The Compromise of Return: Viennese Jews after the Holocaust explores the motivations and expectations that inspired Viennese Jews to reestablish lives in their hometown after the devastation and trauma of the Holocaust. Elizabeth Anthony investigates their personal, political, and professional endeavors, revealing the contours of their experiences of returning to a post-Nazi society, with full awareness that most of their fellow Austrians had embraced the Nazi takeover and their country’s unification with Germany—clinging to a collective national identity myth as "first victim" of the Nazis. Anthony weaves together archival documentation with oral histories, interviews, memoirs, and personal correspondence to craft a multilayered, multivoiced narrative of return focused on the immediate postwar years.

The book consists of six chapters. Chapter 1 begins with setting the historical scene and political context to elucidate the backdrop for the role and position of Jews in Austrian and Viennese society. Chapter 2 begins just before the Soviet conquest of Vienna in April 1945 and with the story of the last Jews murdered in Vienna. Chapter 3 deals with the second group of returning Jews—concentration camp survivors—and outlines their varied processes and journeys, as they also followed their impulse to go to their familial home. Chapter 4 presents how their parties shaped their motivations and expectations of home while they lived abroad after fleeing from the Nazis. Chapter 5 illuminates the return and rerooting of Austrian Jewish professionals, including their struggles and successes. Chapter 6 expounds common challenges encountered by all groups of returnees while relaunching their lives in Vienna, with a focus on developing postwar identity concepts—both Viennese Jewish identity and Austrian national identity.

The Compromise of Return is the first such social history to depict how survivors—individually and collectively—navigated postwar Vienna’s political and social setting. This book will be of special interest to scholars, students, and readers of Holocaust and European studies.

Elizabeth Anthony is a historian and serves as the director of Visiting Scholar Programs at the Jack, Joseph, and Morton Mandel Center for Advanced Holocaust Studies at the United States Holocaust Memorial Museum. She received her PhD in history from Clark University and was co-editor of Freilegungen: Spiegelungen der NS-Verfolgung und ihrer Konsequenzen, Jahrbuch des International Tracing Service, Bd. 4 with Rebecca Boehling, Susanne Urban, and Suzanne Brown-Fleming.

In an engaging, thoroughly researched study, Elizabeth Anthony reveals how and why Jewish returnees came back to ‘their’ city, Vienna, but not to Austria. They persisted in reclaiming their familial, professional, and political homes, as they compromised with ongoing individual and governmental antisemitism, including the refusal to return their property. Elegantly written, Anthony’s book highlights the hardships and disappointments of Jewish survivors as they settled back ‘home.’

With The Compromise of Return Elizabeth Anthony brings history alive. She paints a vivid picture of the life of Jewish Austrians who chose to remain in or returned to Vienna after the fall of the Nazi regime. Through poignant personal interviews coupled with meticulous archival research and in conversation with international scholarship, the author convincingly argues how their unique Jewish-Viennese identities allowed them to remain in an anti-Semitic society that presented itself as Hitler’s first victim. The Compromise of Return, the first comprehensive English-language study on the topic, constitutes a major contribution to post-war Austrian and Holocaust histories.

Deeply researched and beautifully written, this book tells the poignant story of Jewish survivors’ return to Vienna, really for the first time. Brimming with insights, it gives voice to the returnees; it is they who stand at the core of this history.

Importantly, The Compromise of Return: Viennese Jews After the Holocaust places the voices of survivors at the heart of the work without sanctifying them. The result is an important book which beautifully articulates the complexities of Jewish survivors’ return to Vienna.

Photos from event with the Embassy of Austria and Austrian Cultural Forum (June 22, 2021)