Home » Books » In the Company of Others 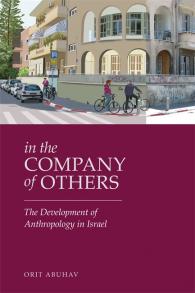 In the Company of Others

The Development of Anthropology in Israel

In Israel, anthropologists have customarily worked in their "home"—in the company of the society that they are studying. In the Company of Others: The Development of Anthropology in Israel by Orit Abuhav details the gradual development of the field, which arrived in Israel in the early twentieth century but did not have an official place in Israeli universities until the 1960s. Through archival research, observations and interviews conducted with active Israeli anthropologists, Abuhav creates a thorough picture of the discipline from its roots in the Mandate period to its current place in the Israeli academy.

Abuhav begins by examining anthropology’s disciplinary borders and practices, addressing its relationships to neighboring academic fields and ties to the national setting in which it is practiced. Against the background of changes in world anthropology, she traces the development of Israeli anthropology from its pioneering first practitioners—led by Raphael Patai, Erich Brauer, and Arthur Ruppin—to its academic breakthrough in the 1960s with the foreign-funded Bernstein Israel Research Project. She goes on to consider the role and characteristics of the field’s professional association, the Israeli Anthropological Association (IAA), and also presents biographical sketches of fifty significant Israeli anthropologists.

Orit Abuhav is senior lecturer at Beit Berl Academic College in Israel. She is a social anthropologist and former head of the Israeli Anthropological Association.

From the interviews and ideas brought forth in this book, one may dip into the storehouse that supplied anthropological inspiration in the past, and legitimately look forward to new insights and their implications in the future.

– Harvey E. Goldberg, from the foreword

Orit Abuhav has authored a fascinating ethnography presenting an unusual fieldwork site and society of ‘natives’: the community of Israeli anthropologists—her own compatriots, teachers, and colleagues. Her lucid narrative, based on extended interviews with a large cohort of veteran and younger Israeli anthropologists as well as an examination of their writings in Hebrew and English, reveals a vast panorama of acute professional dilemmas confronting that small group of practitioners, their diverse social backgrounds,as well as the disparate motivations inducing them to choose ethnographic sites mostly within the borders of Israeli society.

In the Company of Others is a valuable study based on archival sources and interviews with local anthropologists. Its narrative strength lies in its anecdotes - and there are some amusing ones.