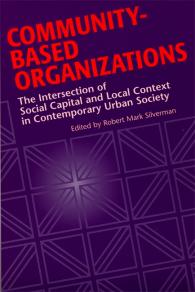 Community-Based Organizations contributes a much needed critical and progressive stance to the debate about social capital and community building in America.

In response to the ongoing debate over the role social capital plays in the creation and continuation of a healthy civic culture, Community-Based Organizations in Contemporary Urban Society studies the close relationship that social capital shares with local context, social organization, and institutional structure. The book’s timely analysis illuminates the institutional barriers currently affecting the mobilization of social capital and establishes a foundation for social and political reform in the future. All components of capital formation—including human, financial, and cultural capital—are identified and considered as they relate to the community development process, as well as how social capital relates to race, class, gender, and religion in urban society.

Community-Based Organizations in Contemporary Urban Society offers vital extensions to existing literature on social capital and allows the reader to consider this topic from multiple perspectives through its broad spectrum of interdisciplinary essays by sociologists, political scientists, and urban planners. The essays discuss important steps in the mobilization of social capital, as well as its role in microfinance programs, community development corporations, homeowners associations, religious institutions, and neighborhood associations. Individual chapters present an array of theoretical arguments, empirical analysis, and applied case studies that are of interest to academics, practitioners, and activists in the community development field.

Drawing on a collection of provocative case studies, this book demonstrates social capital's potential for the purpose of progressive community development. In doing so, it helps us understand how disadvantaged communities can improve their social position while also enhancing democratic participation."

Community-Based Organizations contributes a much needed critical and progressive stance to the debate about social capital and community building in America."

5 hours 7 min ago
HAPPY PUB DATE! Dan Gerber said "If you make yourself available to Cindy Hunter Morgan’s poems, they will revivif… https://t.co/L60dTqsUUj
1 day 1 hour ago
Grab your copy or e-book of @fkwang's YOU CANNOT RESIST ME WHEN MY HAIR IS IN BRAIDS today! https://t.co/htFDjNa9yj https://t.co/zHyt049441
4 days 3 hours ago
Wayne State University Press is proud to announce our winner and finalists of the 2022 Next Generation Indie Book A… https://t.co/Ozy1WEQY1i