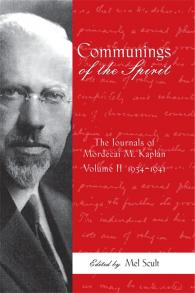 Communings of the Spirit, Volume II

Mordecai M. Kaplan (1881–1983), founder of Reconstructionism, is the preeminent American Jewish thinker and rabbi of our times. His life embodies the American Jewish experience of the first half of the twentieth century. With passionate intensity and uncommon candor, Kaplan compulsively recorded his experience in his journals, some ten thousand pages. At times, Kaplan thought his ideas were too radical or complex to share with his congregation. What he could not share publicly he put into his journals. In this diary we find his uncensored thoughts on a variety of subjects. Thus, the diary was much more sophisticated and radical than anything he published while living.

While in the first volume of Communings of the Spirit, editor Mel Scult covers Kaplan's early years as a rabbi, teacher of rabbis, and community leader, in the second volume we experience through Kaplan the economic problems of the 1930s and their shattering impact on the Jewish community. It becomes clear that Kaplan, like so many others during this period, was attracted to the solutions offered by communism, notwithstanding some hesitation because of the anti-religious nature of communist ideology. Through Kaplan we come to understand the Jewish community in the yishuv (Jews in Palestine) as Kaplan spent two years teaching at the Hebrew University in Jerusalem and his close circle of friends included Martin Buber, Judah Leon Magnes, and other prominent personalities. It is also during this time that the specter of Nazi Germany begins to haunt American Jews, and Kaplan, sensitive to the threats, is obsessed with Jewish security, both in Europe and Palestine.

More than anything else, this diary is the chronicle of Kaplan’s spiritual and intellectual journey in the early 1930s and 1940s. With honesty and vivid detail, Kaplan explores his evolving beliefs on religious naturalism and his uncertainties and self-doubts as he grapples with a wide range of theological issues.

Mel Scult is professor emeritus at Brooklyn College, the City University of New York. He edited Communings of the Spirit: The Journals of Mordecai Kaplan, Volume 1: 1913–1934 (Wayne State University Press, 2002), and his most recent work is The Radical American Judaism of Mordecai M. Kaplan.

Mel Scult regularly performs a kind of intellectual alchemy for us, producing from the wealth of raw materials in Kaplan’s diaries real gems of new insights into the Jewish life of Kaplan’s times. The remarkable thing: though we live in a decidedly postmodern world, these insights gleaned from Kaplan as a key scholar of modernity continue to inspire in the twenty-first century.

Immersing oneself in this work is a journey into the past when the Jewish world was faced with tremendous challenges. Superbly edited by Mel Scult, in this work we eavesdrop on one of the most important religious minds of modern American Jewry coping with difficult ideas, colleagues, and bouts of self-criticism. Indispensable for understanding Kaplan in these critical years.

Mordecai Kaplan’s diaries reveal the breadth of his interests and influence as well as his courage and convictions. Mel Scult’s curation allows us to see into Kaplan’s mind as he struggles with challenges both theological and sociological while the modern world is remade once again by a second world war.

These selections from one of the great Jewish diaries of the twentieth century cover the critical years 1934–1941. Communism, Zionism, Reconstructionism, Fascism, and Palestinian terror all feature here; so do such central figures of the era as Rav Kook, Martin Buber, Henrietta Szold, and the faculty of the Jewish Theological Seminary. An indispensable primary source and a window into the mind of one of American Jewry's foremost religious thinkers.

This volume invites a much broader audience to consider Kaplan's unmediated struggle to rethink American Judaism and Zionism at a crucial time in American Jewish history. More than eight decades ago, Kaplan made a commitment to face the structural challenges of modern Jewish life with intellectual honesty, and he remains an incredibly rich and insightful thought partner for addressing many of the same issues and questions in American Jewish life.