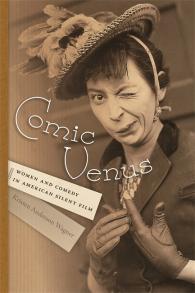 For many people the term "silent comedy" conjures up images of Charlie Chaplin’s Little Tramp, Buster Keaton’s Stoneface, or Harold Lloyd hanging precariously from the side of a skyscraper. Even people who have never seen a silent film can recognize these comedians at a glance. But what about the female comedians? Gale Henry, Louise Fazenda, Colleen Moore, Constance Talmadge—these and numerous others were wildly popular during the silent film era, appearing in countless motion pictures and earning top salaries, and yet their names have been almost entirely forgotten. As a consequence, recovering their history is all the more compelling given that they laid the foundation for generations of funny women, from Lucille Ball to Carol Burnett to Tina Fey. These women constitute an essential and neglected sector of film history, reflecting a turning point in women’s social and political history. Their talent and brave spirit continues to be felt today, and Comic Venus: Women and Comedy in American Silent Film seeks to provide a better understanding of women’s experiences in the early twentieth century and to better understand and appreciate the unruly and boundary-breaking women who have followed.

The diversity and breadth of archival materials explored in Comic Venus illuminate the social and historical period of comediennes and silent film. In four sections, Kristen Anderson Wagner enumerates the relationship between women and comedy, beginning with the question of why historically women weren’t seen as funny or couldn’t possibly be funny in the public and male eye, a question that persists even today. Wagner delves into the idea of women’s "delicate sensibilities," which presumably prevented them from being funny, and in chapter two traces ideas about feminine beauty and what a woman should express versus what these comedic women did express, as Wagner notes, "comediennes challenged the assumption that beauty was a fundamental component of ideal femininity." In chapter three, Wagner discusses how comediennes such as Clara Bow, Marie Dressler, and Colleen Moore used humor to gain recognition and power through performances of sexuality and desire. Women comedians presented "sexuality as fun and playful, suggesting that personal relationships could be fluid rather than stable." Chapter four examines silent comediennes’ relationships to the modern world and argues that these women exemplified modernity and new womanhood. The final chapter of Comic Venus brings readers to understand comediennes and their impact on silent-era cinema, as well as their lasting influence on later generations of funny women.

Comic Venus is the first book to explore the overlooked contributions made by comediennes in American silent film. Those with an interest in film and representations of femininity in comedy will be fascinated by the analytical connections and thoroughly researched histories of these women and their groundbreaking movements in comedy and stage.

Kristen Anderson Wagner’s Comic Venus: Women and Comedy in American Silent Film is a significant contribution to the scholarship on silent cinema. Debunking the still too common cliché of women as "not funny," Wagner explores the false binary of beauty and humor that discourages and then obscures female comics. Wagner’s close examination of several key stars, extra-textual materials, and film/stage performance – with a careful demarcation of comic styles and genres—markedly points to silent era comediennes as disruptive forces of change across gender, sexuality, and class.

Comic Venus documents the work of an astonishing range of silent era comediennes, proving how central women were to early film comedy and how central film comedy was to rapidly evolving gender norms in the early twentieth century. An essential re-reading of silent comedy, long overdue.

– Shelley Stamp, author of Lois Weber in Early Hollywood and Movie-Struck Girls: Women and Motion Picture Culture after the Nickelodeon

This book is a gold mine of rich archival materials on silent film comediennes. Kristen Anderson Wagner establishes the profound impact of so many forgotten female clowns on the history of American cinema. Written in a witty, lively, and engaging style, Comic Venus is a must-read for anyone interested in the gender politics of comedy and media representation.

Kristen Anderson Wagner fearlessly capsizes conventional histories of comedy and cinema in this stirring analysis of the silent era’s unsinkable women comedians. The first book to explore and theorize the histories and meanings of these mostly-forgotten stars, Comic Venus makes the rough-and-tumble slapstick world come alive and changes the way we’ll teach and think about comic women and silent cinema.

Grounding her work in issues of gender politics and power structures, Wagner offers richly researched and finely articulated arguments about female beauty and grotesque comic personas, providing lively insights about common misperceptions that female comic is a disruptive, crazy oxymoron. Against early modern theorists like Freud and Bergson, Wagner brackets her study on the transgressive value of early-20th-century female comics, who used pies as weapons to break boundaries against restrictive societal models. She strategically demonstrates how silent-era comediennes subverted typical feminine ideals such as refinement, passivity, and respectability with unladylike chases and pratfalls. She challenges the ways in which beauty was considered an essential component of femininity with very funny stars like Colleen Moore, Marion Davies, and Louise Fazenda completely altering comic expectations. As C. S. Lewis once observed about sexuality and laughter, Venus is essentially a comic goddess. Wagner’s vibrant comediennes demonstrate that comedy and femininity coexist with hilarity.

Compels readers to take seriously the contributions of silent-film-era comediennes. . . . [an] essential resource for anyone researching this era of film comedy moving forward. . . . has an appendix that provides extensive annotated filmographies covering films both examined and not. These filmographies represent the vastness of comedienne contributions to silent film that have yet to be considered and serve as an invaluable resource for future research on comedy, film, and gender politics.

[. . .] clearly written, explore topics central to the changing world of the early twentieth century: ideals of beauty; issues of sensuality, sexuality, and desire; and the idea of modernity and the New Woman. The book is framed by an introduction that discusses comedy as a social force for change, why it is an ideal genre to push boundaries and challenge traditional gender roles, and why comediennes tend to be obscure and neglected.

If one is thus left with reservations as to whether breaking boundaries overstates the silent comedienne’s achievement, one might also recall that Wagner is careful to frame this as her ‘potential’. That is, the silent era’s ‘comic Venus’ can be understood as a harbinger of the social change that funny women might bring about so that Comic Venus unites past and future feminist aspirations.

The book encompasses the work of an impressive number of comediennes, representing a wide variety of performance styles, demonstrating the diversity of American film comedy of the silent era. An abundance of illustrations make vivid the comediennes, spanning film stills and a variety of publicity and extratextual materials, and demonstrating the depth of Wagner’s research. In addition there is an invaluable appendix containing biographies and selected filmographies, as well as a thorough and well signposted index. This is a meticulously researched addition to the scholarship regarding silent film, comedy studies and, vitally, women’s contribution to early cinema.