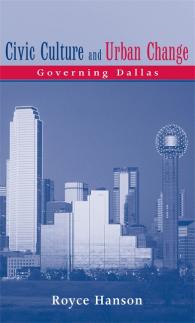 For anyone interested in urban political economy, this book is a must read.

Civic Culture and Urban Change analyzes the Dallas government’s adaptation to shifts in its demography and economic structure that occurred after the assassination of President John F. Kennedy in 1963. The book examines civic culture as a product of a governing regime and the constraints it placed on the capacity of the city to adapt to changes in its population, economy, and the distribution of political power. Royce Hanson traces the impact of civic culture in Dallas over the past forty years upon the city’s handling of major crises in education, policing, and management of urban development and shows the reciprocal effect of those responses on the development of civic capital.

Hanson relates the city’s civic culture to its economic history and political institutions by following the progression of Dallas governance from business oligarchy to regency of professional managers and federal judges. He studies the city’s responses to school desegregation, police–minority conflicts, and other issues to illuminate the role civic and organizational cultures play in shaping political tactics and policy. Hanson builds a profile of political life in Dallas that highlights the city’s low voter turnouts, sparse civic and political networks, and relative lack of multiracial institutions and mechanisms. Civic Culture and Urban Change summarizes the "solution sets" Dallas employs in dealing with major issues, and discusses the implications of those findings for the future of effective democracy in Dallas and other large cities.

Royce Hanson is Professor of Practice in Policy Sciences at the University of Maryland, Baltimore County.

The Dallas story is an instructive one, and Royce Hanson tells it with insight, grace, and a keen eye for the telling detail. As a city with a dynamic and globally engaged economy, Dallas nevertheless struggles with burgeoning problems. As Hanson shows, the city is less in control of its own destiny than ever before. Hanson lays bare the inherent weaknesses of an anti-politics tradition and the inadequacies of government by managers. For anyone interested in urban political economy, this book is a must read.

This is an impressing essay. The author lends credibility, substance, and life to abstract academic commonplaces like 'regime' and 'civic culture.' Close to the evidence, swift with insight, and graceful in its prose…

5 hours 14 min ago
HAPPY PUB DATE! Dan Gerber said "If you make yourself available to Cindy Hunter Morgan’s poems, they will revivif… https://t.co/L60dTqsUUj
1 day 1 hour ago
Grab your copy or e-book of @fkwang's YOU CANNOT RESIST ME WHEN MY HAIR IS IN BRAIDS today! https://t.co/htFDjNa9yj https://t.co/zHyt049441
4 days 3 hours ago
Wayne State University Press is proud to announce our winner and finalists of the 2022 Next Generation Indie Book A… https://t.co/Ozy1WEQY1i