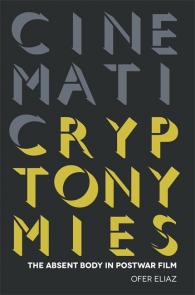 The Absent Body in Postwar Film

Following World War II, the world had to confront the unmournable specters of those who had been erased socially and historically. Cinematic Cryptonymies: The Absent Body in Postwar Film explores how cinema addressed these missing bodies through an in-depth analysis of key filmmakers from the immediate postwar moment through the present. Ofer Eliaz provides a cinematic history as well as a theoretical framework rooted in psychoanalysis that allows the reader to see and understand the absence and erasure of bodies in film as a response to historical trauma.

Drawing on a psychoanalytic technique focused on what one leaves unspoken, Cinematic Cryptonymies investigates a diverse range of postwar film. The first chapter examines how Georges Franju deployed Paris as a city that hides the horrors of its past — here the vanished bodies of the victims of the Holocaust — behind its facade. Eliaz then looks at intergenerational haunting in the early horror films of Mario Bava, in which unacknowledged violence and loss is passed down across generations during the time of Italy’s economic miracle. The unique use of montage in the late films of Jean-Luc Godard is the focus of the third chapter, through which the viewer only receives a fragmented and partial image of struggle — an attempt to address the failure of cinema to bear witness to the horrors of the wars and mass killings of the 1990s. Eliaz ends in the 2000s by examining the transnational films of Naomi Uman, whose experimental films engage the violence and loss experienced in different forms of border crossings, including national and social borders.

Centered on the question of how one can mourn losses that are so traumatic they become unspeakable, Cinematic Cryptonymies is an important contribution to conversations on postwar film, trauma, and the intersection of psychoanalysis and the humanities. Scholars interested in postwar film and history, trauma and war, or psychoanalytic theory will all find this volume of interest.

Cinematic Cryptonymies is a brilliant account of European cinema’s absences and occlusions and makes a significant contribution to contemporary film theory. Eliaz brings renewed insight into the visual forms of postwar capital and cinema’s potential for political critique.

Combining inventive readings of film form with an intricate reworking of the metapsychological work of Nicolas Abraham and Maria Torok for cinema studies, Eliaz makes a valuable contribution to psychoanalytic film theory and a compelling case for its continued vitality.

Cinematic Cryptonomies is an important step toward a cryptonomic criticism: a speculative mode of writing that inheres—or is interred—in the very form of critical writing. In the book, Eliaz invites us into the intricacies and intrigues of experimenting with what this writing might look like.