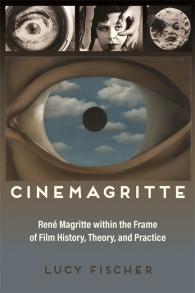 René Magritte within the Frame of Film History, Theory, and Practice

Cinemagritte: René Magritte within the Frame of Film History, Theory, and Practice investigates the dynamic relationship between the Surrealist modernist artist René Magritte (1898–1967) and the cinema—a topic largely ignored in the annals of film and art criticism. Magritte once said that he used cinema as "a trampoline for the imagination," but here author Lucy Fischer reverses that process by using Magritte’s work as a stimulus for an imaginative examination of film.

While Fischer considers direct influences of film on Magritte and Magritte on film, she concentrates primarily on "resonances" of Magritte’s work in international cinema—both fiction and documentary, mainstream and experimental. These resonances exist for several reasons. First, Magritte was a lover of cinema and created works as homages to the medium, such as Blue Cinema (1925), which immortalized his childhood movie theater. Second, Magritte’s style, though dependent on bizarre juxtapositions, was characterized by surface realism—which ties it to the nature of the photographic and cinematic image. Third, Magritte shares with film a focus on certain significant concepts: the frame, voyeurism, illusionism, the relation between word and image, the face, montage, variable scale, and flexible point of view. Additionally, the volume explores art documentaries concerning Magritte as well as the artist’s whimsical amateur "home movies," made with his wife, Georgette, friends, and Belgian Surrealist associates. The monograph is richly illustrated with images of Magritte’s oeuvre as well as film stills from such diverse works as The Eternal Sunshine of the Spotless Mind, Eyes Without a Face, American Splendor, The Blood of a Poet, Zorns Lemma, The Island of Dr. Moreau, The Draughtsman’s Contract, and many more.

Cinemagritte brings a novel and creative approach to the work of Magritte and both film and art criticism. Students, scholars, and fans of art history and film will enjoy this thoughtful marriage of the two.

Lucy Fischer is Distinguished Professor Emerita of Film and Media Studies at the University of Pittsburgh. She is the author/editor of twelve scholarly books and has worked in curatorial positions at The Museum of Modern Art (NYC) and the Carnegie Museum of Art (Pittsburgh). She is the former president of the Society for Cinema and Media Studies and is the recipient of fellowships from the National Endowment for the Arts and for the Humanities.

Lucy Fischer’s Cinemagritte offers a dazzling analysis of René Magritte’s little-known relation to the cinema. Drawn to the beauty and wit of the painter’s oeuvre, she traces the ways in which Magritte’s work raises conceptual, artistic, and philosophical issues that have direct relevance to film theory and practice. The result is a brilliant argument from a gifted writer who continues to write eloquently about cinema and the arts.

Cinemagritte is a fascinating and absorbing seminal study of the oblique influence of surrealist painter René Magritte on various practice throughout film history. The scholarship is impeccable. It is an absolutely intriguing study that would be attractive in itself, but written by one of the leading film scholars in the world, it will be used as a model of inventive and creative scholarship.

– Timothy Corrigan, professor of cinema and media studies, University of Pennsylvania, and author of A Cinema without Walls and The Essay Film

Lucy Fischer occupies a very special space in the exploration of how cinema relates to important movements in art and design. Here she tackles the ‘resonances’ between Magritte’s enigmatic paintings and an encyclopedic range of films, from avant-garde to mainstream. Both the artist and cinema are illuminated in rewarding and often surprising ways.

In Cinemagritte, Lucy Fischer excavates the longstanding and reciprocal interest between René Magritte and the cinema. Far more than a history of this interest, Fischer creates a set of ‘resonances’ that emerges from a nuanced reading of the artist’s career and preoccupations, at once visual and conceptual, that provides new and important analytic tools with which to understand a wide range of cinematic movements and preoccupations.

Lucy Fischer triumphs again with her fascinating monograph on René Magritte. In the course of detailing compelling ‘resonances’ regarding cinema and Magritte’s paintings hitherto rarely addressed, Fischer revisits Surrealism, the extended French avant-garde, and the early Hollywood cinema Magritte loved. Her broad-ranging, original, and exhaustive intermedial research not only offers a new lens for looking at Magritte but introduces readers to many forgotten or little-known surrealist and silent films. Above all, Fischer has unframed René Magritte’s work from the ‘the hermetic world of art history so as to "repurpose" it for the broader world of film.’ A pleasurable, must-read volume.

By paying special attention to Rene Magritte’s conceptual approach, Lucy Fischer has crafted a book filled with new insights on Surrealism in art and the American film-making avant-garde of the sixties. Without a doubt, Cinemagritte will appeal to both the specialist and to the general reader. Thoroughly illustrated, Fischer’s book marks a step forward in the dialogue between film studies and the history of art.

There is an abundance of paintings from Magritte here and indication
perhaps of Fischer’s deep knowledge of the artist and his works. This passion project is very persuasive, it convinces the reader that there is a deep connection
between the art of Rene Magritte and the art of cinema.