Home » Books » Cinema at the Periphery 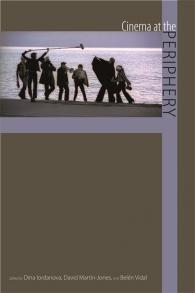 Cinema at the Periphery

From Iceland to Iran, from Singapore to Scotland, a growing intellectual and cultural wave of production is taking cinema beyond the borders of its place of origin—exploring faraway places, interacting with barely known peoples, and making new localities imaginable. In these films, previously entrenched spatial divisions no longer function as firmly fixed grid coordinates, the hierarchical position of place as "center" is subverted, and new forms of representation become possible. In Cinema at the Periphery, editors Dina Iordanova, David Martin-Jones, and Belén Vidal assemble criticism that explores issues of the periphery, including questions of transnationality, place, space, passage, and migration.

Cinema at the Periphery examines the periphery in terms of locations, practices, methods, and themes. It includes geographic case studies of small national cinemas located at the global margins, like New Zealand and Scotland, but also of filmmaking that comes from peripheral cultures, like Palestinian "stateless" cinema, Australian Aboriginal films, and cinema from Quebec. Therefore, the volume is divided into two key areas: industries and markets on the one hand, and identities and histories on the other. Yet as a whole, the contributors illustrate that the concept of "periphery" is not fixed but is always changing according to patterns of industry, ideology, and taste.

Cinema at the Periphery highlights the inextricable interrelationship that exists between production modes and circulation channels and the emerging narratives of histories and identities they enable. In the present era of globalization, this timely examination of the periphery will interest teachers and students of film and media studies.

Dina Iordanova is professor of film studies and director of the Centre for Film Studies at the University of St. Andrews, Scotland. She is the author of Cinema of Flames: Balkan Film, Culture, and the Media, Emir Kusturica, and Cinema of the Other Europe. She is the editor of BFI’s Companion to Russian and Eastern European Cinema and Cinema of the Balkans.

David Martin-Jones is senior lecturer in film studies at the University of St. Andrews, Scotland. He is the author of Deleuze, Cinema and National Identity, Deleuze Reframed, Scotland: Global Cinema and the forthcoming Deleuze and World Cinemas.

Belén Vidal is lecturer in film studies at King’s College London. She has published on the period film in the journals Screen and Journal of European Studies and on contemporary Spanish cinema.

Cinema at the Periphery focuses our attention on a wide range of dy­namic films and film practices from around the globe whose value is not in their relationship to a Hollywood norm but in their ability to reveal the impact of the local, to suggest alternative spheres of influence, to recognize the range of original and creative work produced outside the dominant center, and to potentially raise differ­ent theoretical questions."

Cinema at the Periphery offers a timely and useful collection of reflections that challenge conventional definitions of national film cultures. This engaging volume is a valuable addition to the growing canon of scholarship in the field of transnational cinemas."

– B. Ruby Rich, professor of film studies at University of California-Santa Cruz