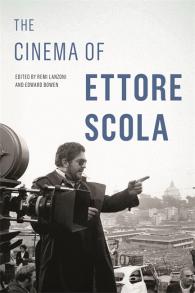 The Cinema of Ettore Scola

The Cinema of Ettore Scola offers contemporary perspectives on Ettore Scola (1931–2016), one of the premier filmmakers of Italian cinema. Scola was a crucial figure in postwar Italy as a screenwriter of comedies in the 1950s and 1960s who later became one of the country’s most beloved directors in the 1970s and 1980s with his bittersweet comedies and dramas on history, politics, and social customs. While Scola has received extensive attention from scholars based in Italy and France, Rémi Lanzoni and Edward Bowen’s edited volume is the first English-language book on Scola’s cinematographic career.

The volume (containing fourteen chapters) is organized in four parts, the first two of which focus both on Scola’s contributions to Comedy Italian Style—as a screenwriter and director—and his commentaries on the history of Italy, Rome, and the film industry. The second half of the book is divided into sections on Scola’s relationship to and use of place, politics, and legacy. Mariapia Comand’s chapter begins the volume with an exploration of the development of Scola’s narrative methods by examining his early work as an illustrator, ghostwriter, and screenwriter. Later, Brian Tholl approaches one of Scola’s best-known and most frequently studied films, Una giornata particolare, from a less-explored perspective, namely its commentary on surveillance and internal exile, or confino, during the fascist period. At the close of the volume is a broad-sweeping tribute to and reflection on Scola’s filmmaking by Gian Piero Brunetta, a leading historian of Italian cinema who developed a close relationship with Scola over the years, who reveals the varied narrative strategies linked to food that the director utilized for character development and social commentary.

The Cinema of Ettore Scola makes Scola accessible to English-reading audiences and helps readers better understand his film style, the major themes of his work, and the representations of twentieth-century Italian history in his films.

Rémi Lanzoni is an associate professor of romance languages and teaches Italian cinema at Wake Forest University. He specializes in French and Italian film and has published several books on national cinemas, including French Cinema: From Its Beginnings to the Present, Comedy Italian Style: The Golden Age of Italian Film Comedies, French Comedy on Screen: A Cinematic History, and Rire de plomb: La comédie à l’italienne des années 70.

Edward Bowen is an advanced lecturer of Italian at the University of Kansas. He specializes in Italian film history, exhibition, independent cinema, and urban politics. His dissertation examines the role that cinema reuse has played in urban renewal campaigns in Rome, led by city officials and grassroots movements. He has published in Studies in Documentary Film, Journal of Italian Cinema and Media Studies, and Cinema e storia.

Lanzoni and Bowen have assembled and skillfully guided a stellar cast of scholars to produce a coherent, wide-ranging, and illuminating study. This intelligent volume finally mines the complexity of Ettore Scola’s work as writer and director, and will become essential reading for anyone interested in the history of Italian cinema.

– Giacomo Lichtner, author of Fascism in Italian Cinema Since 1945: The Politics and Aesthetics of Memory

This brilliantly researched volume by rising and seasoned scholars on Scola’s legacy captures his meta-cinematic style from film to digital image; his inventiveness in the use of different narrative forms; interactions with other filmmakers, including Pietrangeli, Pasolini, and Fellini; and powerful uses of space, place, and time in philosophic explorations of history, memory, and politics.

Unfairly, Scola’s work is less well-known outside of Italy than is the work of many of his contemporaries. This important edited collection, with its broad array of approaches and methods, makes Scola intelligible for readers and viewers only coming to know his films, but it also refreshes and reframes our understanding of this powerful, curious, and curiously political body of filmmaking.

In this volume, leading experts offer brilliant assessments of the themes of comedy, exile, and nostalgia in Scola’s work, as well as of his oeuvre as a whole and his activities as a screenwriter and as a public figure. The only volume in English to be entirely dedicated to this important filmmaker, this superb collection is destined to become an indispensable resource for anyone interested in postwar Italian cinema.

Beyond just being illuminating to Scola’s filmography, it’s an interesting concept to consider in light of obvious parallels to the present day. Taking a plunge into The Cinema of Ettore Scola feels like the intelligent and thoughtful antidote to both the grind of Hollywood escapism and the chaos of this bizarre year. Scola’s continued relevance now seemingly acts as an omen of things to come, an echo of the past shining a light onto a potentially avoidable future.

The first book-length study in English of director and screenwriter Ettore Scola (1931-2016), The Cinema of Ettore Scola is a handsome selection of essays by international authors, full of stimulating pathways toward expanding one's understanding of this humanist Italian political director with his roots in the commedia all'italiana. Covering a long career that included directing twenty-seven feature films in addition to documentaries, short films, and omnibus episodes, it is a collection of academic texts that thankfully make do with only a thin veneer of academy speak. Edited by Rémi Lanzoni of Wake Forest University and Edward Bowen at the University of Kansas, it should resuscitate interest in one of modern Italy's most important--and entertaining cultural figures.