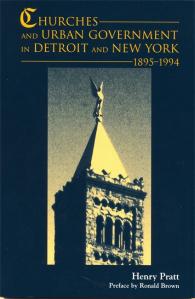 Churches and Urban Government in Detroit and New York, 1895-1994

Beginning in the 1890s, the social gospel movement and its secular counterpart, the Progressive movement, set the stage for powerful church and city governance connections. What followed during the next 100 years was the emergence of religious bodies as an important instrument for influencing City Hall on moral and social issues. Churches and Urban Government compares the governing styles of Detroit and New York City from 1895 to 1994 and looks at the steps city-wide religious bodies took to advance the interests of their communities and their local government during this chaotic period in urban history.

Detroit and New York City make for a very interesting case study when casting the two cities’ many similarities against their contrasting urban governance styles. What these cities share is a longstanding liberal political culture and comparable ethnic and racial diversity as well as large populations of Catholics and Protestants. Emphasizing the role of Black churches, Henry J. Pratt—with additional material from Ronald Brown—examines how immigration, the Great Depression, and the Civil Rights movement all nurtured this developing link between religion and politics, helping churches evolve into leadership roles within these metropolitan centers.

There is simply no other work I know of that explores the connections of church federations and urban governance. The book offers new perspectives on urban politics and religion and politics . . . The use of archival material and personal interviews is refreshing and adds significantly to the book.

It is important that Pratt's research and insights have been published. Without question, urban and religion historians have much to gain by reading this book."

Provides an engaging social and religious history of Detroit and New York and presents a compelling account of similarities and differences. This book will be cited as a standard in the field and will be of interest to students of religion, urban politics, and social history."

This book belongs to a small but growing literature that analyses the role of religious bodies in urban governance in the in US context. The introduction situates the study in he context of historical institutionalist theory and regime theory on the city. Overall, the book does a good job positions urban church institutions in their wider historical context.

1 day 3 hours ago
Happy Pub Date to THE SPOOK WHO SAT BY THE DOOR, SECOND EDITION! This new edition of a literary classic now includ… https://t.co/XrCsLZvf4D
1 day 3 hours ago
RT @DarkProjections: Returned from a great two weeks in Europe to find copies of my new book! Kolchak:The Night Stalker, one of the Pion… https://t.co/kPJ5kKLRyr
2 days 45 min ago
RT @oneitadetroit: Thrilled that @WSUPress is releasing the 2E of Sam Greenlee's "The Spook Who Sat by the Door" tomorrow. Introductio… https://t.co/hZpAjxluIl