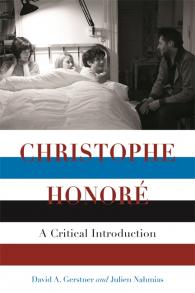 David A. Gerstner and Julien Nahmias

Considering each of the trilogy films in turn, the authors take a close look at Honoré’s cinematic technique and how it engages with France’s contemporary cultural landscape. With careful attention to the complexity of Honoré’s work, they consider critically contested issues such as the filmmaker’s cinematic strategies for addressing AIDS, the depth of his LGBTQ politics, his representations of death and sexual desire, and the connections between his films and the New Wave. Anchored by a comprehensive interview with the director, the authors incorporate classical and contemporary film theories to offer a range of cinematic interventions for thinking queerly about the noted film author.

Christophe Honoré: A Critical Introduction reconceptualizes the relationship between film theory and queer theory by moving beyond predominant literary and linguistic models, focusing instead on cinematic technique. Students and teachers of queer film will appreciate this thought-provoking volume.

David A. Gerstner is professor of cinema studies at the City University of New York, College of Staten Island, where he is chair of the Department of Media Culture. He is also a faculty member at the CUNY Graduate Center. His books include Queer Pollen: White Seduction, Back Male Homosexuality, and the Cinematic and Authorship and Film (coedited with Janet Staiger).

Julien Nahmias is a psychiatrist and works at the Institut Paul Sivadon–Association L’Élan Retrouvé, Paris, France. He has written a medical thesis about the cinematic representation of the psychiatrist and has given lectures on the topic of psychiatry and cinema (University of Paris V).

An exceedingly welcome exemplar of queer analysis focused on a queer filmmaker. Wisely insisting upon queerness as a form of productive disturbance, the authors’ reading of Honoré’s too-little-seen trilogy does something rare in cinema studies: it brings a group of films into definitive focus while inspiring readers’ own complex, enthusiastic reactions. This book will no doubt be read, returned to, and learned from by French, queer, and authorship scholars for many years to come.

In this elegant and erudite book, Gerstner and Nahmias masterfully unfold Christophe Honoré’s provocative statement (provocative, at least, in a French context): ‘I am a homosexual narrator.’ Delightfully lingering in all the transgressive beds Honoré has made in his films, Gerstner and Nahmias not only show how Honoré playfully reinvents the French New Wave; they reveal the crisis of family norms—and, therefore, one's self-identity—in French society.

Christophe Honoré has become a pivotal figure in contemporary, post–New Wave French cinema. In this remarkable volume, so attentive to questions of cinematic form, David A. Gerstner and Julien Nahmias situate Honoré’s filmmaking practice within a vital history of both queer aesthetics and French film theory.

An exciting new study that will prove invaluable to scholars of Honoré’s work, contemporary French cinema, and LGBTQI issues in the cinema. Gerstner and Nahmias do an expert job of unpacking the complexities of Honoré’s brilliant but also at times impenetrable films. Their work illuminates the director’s significance, and the authors examine his films with sensitivity, intelligence, and grace.

– David Greven, professor of English language and literature at University of South Carolina and author of Psycho-Sexual: Male Desire in Hitchcock, Scorsese, De Palma, and Friedkin

There is a distinct pleasure in reading Gerstner and Nahmias's analysis of the films of the trilogy. Ample illustration and ekphrastic detail give one the happy impression of rewatching the films with critical distance and leisure, gaining appreciation from the authors’ insights throughout their close readings.

Christophe Honoré is a tour de force of deep explication. Its central chapter, Love Songs, ranks up there with the very best English-language stand-alone work on a specific French film. It’s a pleasure to read such superb work.

Gerstner and Nahmias’s unusual partnership (Gerstner is a film scholar whereas Nahmias is a psychiatrist with a scientific expertise in cinema) produces one of the best and most profound books on French cinema I have read in recent years. Their critical presentation of Honoré’s Paris trilogy opens many avenues and one can only hope that the two authors will continue to explore the filmmaker’s cinematic landscape and provide us with more insight.