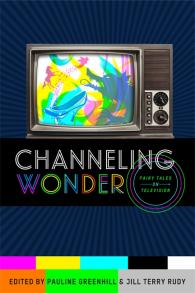 Television has long been a familiar vehicle for fairy tales and is, in some ways, an ideal medium for the genre. Both more mundane and more wondrous than cinema, TV magically captures sounds and images that float through the air to bring them into homes, schools, and workplaces. Even apparently realistic forms, like the nightly news, routinely employ discourses of "once upon a time," "happily ever after," and "a Cinderella story." In Channeling Wonder: Fairy Tales on Television, Pauline Greenhill and Jill Terry Rudy offer contributions that invite readers to consider what happens when fairy tale, a narrative genre that revels in variation, joins the flow of television experience.

Looking in detail at programs from Canada, France, Italy, Japan, the UK, and the U.S., this volume’s twenty-three international contributors demonstrate the wide range of fairy tales that make their way into televisual forms. The writers look at fairy-tale adaptations in musicals like Rodgers and Hammerstein’s Cinderella, anthologies like Jim Henson’s The Storyteller, made-for-TV movies like Snow White: A Tale of Terror, Bluebeard, and the Red Riding Trilogy, and drama serials like Grimm and Once Upon a Time. Contributors also explore more unexpected representations in the Carosello commercial series, the children’s show Super Why!, the anime series Revolutionary Girl Utena, and the live-action dramas Train Man and Rich Man Poor Woman. In addition, they consider how elements from familiar tales, including "Hansel and Gretel," "Little Red Riding Hood," "Beauty and the Beast," "Snow White," and "Cinderella" appear in the long arc serials Merlin, Buffy the Vampire Slayer, and Dollhouse, and in a range of television formats including variety shows, situation comedies, and reality TV.

Jill Terry Rudy is associate professor of English at Brigham Young University. She edited The Marrow of Human Experience: Essays on Folklore by William A. Wilson.

[...]The analyses offered show a great deal of insight and creativity, and this is an exacting, irreverent, imaginative compendium that will prove valuable to those interested in the Grimms, gender theory, or any permutation thereof.

Anyone interested in the great impact of fairy tales on television, or how television has exploited fairy tales, must read the fascinating seventeen essays in Channeling Wonder: Fairy Tales on Television, edited by Pauline Greenhill and Jill Terry Rudy. Though it is next to impossible to cover all aspects of fairy-tale adaptation through commodified television including commercials, the essays provide helpful critical interdisciplinary approaches and perspectives that will enable readers to grasp key developments in national and international TV fairy-tale series. This is a pioneer book, and I hope the beginning of more fruitful analyses to come.

– Jack Zipes, professor emeritus at the University of Minnesota

There is little written in the area of fairy tales and television studies, so this is an important and particularly welcome collection to redress that dearth.

Channeling Wonder, a recent addition to the prolific "Series in Fairy-Tale Studies," published by Wayne State University Press, is truly a pioneering book. The collection of essays edited by Pauline Greenhill and Jill Terry Ruddy proposes to fill a long-standing lacuna within both fairy-tale and television studies by examining televised fairy tales, which have so far received little scholarly attention, especially in comparison to their cinematic counterparts. . . Channeling Wonder successfully lays the groundwork and provides fuel for further research.

Greenhill and Rudy make a clear case for the need of a sustained investigation of the televised mediation of fairy tail, and the contributors do not disappoint in answering this call. . . Fairy tale and folklore scholars will find much to appreciate in this book, and scholars of television more broadly should welcome the sustained readings of reality television and children's programming through a different lens.

Channeling Wonder’s chapters present a variety of styles. While some readers might find it makes the purpose of the book a bit ambiguous, I believe this is the book’s strength, as it offers a broad understanding of the different fields where folklore can find its niche: ethnographic observation, descriptive review of fairy-tale-based television shows, art history, cinema, theoretical analysis, and methodology, etc.