Home » Books » The Case Against Academic Boycotts of Israel 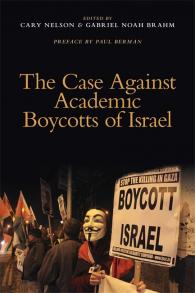 The Case Against Academic Boycotts of Israel

How should we understand the international debate about the future of Israel and the Palestinians? Can justice be achieved in the Middle East? Until now, there was no single place for people to go to find detailed scholarly essays analyzing proposals to boycott Israel and the Boycott, Divestment, and Sanctions (BDS) movement of which they are a part.

This book for the first time provides the historical background necessary for informed evaluation of one of the most controversial issues of our day— the struggle between two peoples living side-by-side but with conflicting views of history and conflicting national ambitions. This book encourages empathy for all parties, but it also takes a cold look at what solutions are realistic and possible. In doing so, it tackles issues, like the role of anti-Semitism in calls for the abolition of the Jewish state, that many have found impossible to confront until now. The book gathers essays by an international cohort of scholars from Britain, Israel, and the United States.

Cary Nelson is Jubilee Professor of Liberal Arts and Sciences at the University of Illinois at Urbana-Champaign and the immediate past president of the American Association of University Professors. His thirty authored or edited books include No University is an Island: Saving Academic Freedom.

Gabriel Noah Brahm is Associate Professor of English at Northern Michigan University, coauthor of The Jester and the Sages: Mark Twain in Conversation with Nietzsche, Freud and Marx and coeditor of Prosthetic Territories: Politics and Hypertechnologies.

What is the Academic BDS (Boycott, Divest, Sanction) movement really all about? What is the relation, if any, of anti-Zionism to anti-Semitism? What are the historical, ethical, and political parameters of the current controversy over BDS on our campuses—a controversy that has, thus far, generated more heat than light? The editors of this book have brought together a set of thirty essays by leading scholars and public intellectuals—essays as stunning as they are wide-ranging, as remarkably well-informed and factually based as they are closely reasoned and persuasive. From the opening essays on academic freedom through the richly nuanced essays by Israeli academics currently teaching in mixed Arab-Israeli classrooms to the historical timeline, the case against Academic Boycott is made with such authority that no one who cares about global politics in the 21st Century can afford not to read these pages. This is that rare event—a necessary book, a real game-changer.

Written mostly by academic scholars, the essays are diverse, informative, and lucidly presented, covering the philosophical problems of academic boycotts, discussions of contentious debates at some academic associations and a few college campuses, the BDS movement, and the Left and American culture among other topics. Verdict While some readers may want to dismiss this work as partisan because of its title, several contributors have broadened the topic in a crucial way: the importance of supporting academic freedom, lest narrow, single-issue politics irreparably damage the university's mission of encouraging the unfettered exchange of knowledge and ideas.

The essays in this compilation are both timely and timeless. Perhaps the timelessness has to do with antisemitism’s enduring nature, but there is an unheimlich or uncanny quality to them as well—like knowing that I could be writing the same words circa 1930s, from a cafe in Berlin, and understanding that BDS is the latest but not last incarnation.

If un-blinkered students and professors (who still make up the majority at all schools, even if they might lack the conviction of Israel’s defamers) are ever to make progress, they need to base their choices of action on a bedrock of ideas, including the powerful and compelling ideas that can be found on every page of The Case Against Academic Boycotts of Israel.

I think that Nelson and Brahm are right but that their success depends on reaching an audience—especially the scientists who have a stake in these debates but are usually left out of them—beyond the audience their collection is most likely to find. That will require a retail politics at colleges and universities, and within scholarly associations, that will be difficult and time consuming. But I know of no better guide than this book to the kinds of arguments one needs to make, or of any more heartening example of the diversity of voices and talents that can be drawn to the effort.

– Jonathan Marks, Scholars For Peace in the Middle East

This very substantial volume consists of no less than thirty-four solid and useful essays by (mainly) American scholars and writers against any proposed academic boycott of Israel. It is an invaluable guide to the subject, and ought to be read by anyone concerned with this arrant attack on the Jewish state and it alone. . . .Taken together, these essays provide powerful ammunition for academics and students who are appalled by this latest exercise in antisemitism, and the book should certainly be read by Australian university staff and students who are determined that no boycott
of Israel be allowed to happen here and need the intellectual cannon-fodder to fight proponents of a boycott.

– William D. Rubinstein, Jewish Down Under

No other issue has divided the progressive academic community in the United States as bitterly as the BSD movement against Israel. This balanced and informative volume gives an indispensable account of the controversy as well as of the larger historical and political context of the conflict in Israel/Palestine. It is a book that all who care about this issue must consult.

The Case Against Academic Boycotts of Israel provides a rare combination of intellectually challenging and thought-provoking investigation together with a strong dose of common sense; a valuable and necessary intervention in a debate desperately in need of both. This is particularly valuable with regard to the BDS movement, whose combination of dishonesty, naivete and dissimulation has ensnared many too many people who should know better (and would, if they spent a few hours with this collection).

– Eric Alterman, CUNY Distinguished Professor of English and Journalism at Brooklyn College and media columnist for The Nation

All states commit crimes. Only one in the world is deemed illegitimate for that reason: Israel. Only one is subject to cultural and academic boycotts the world over: Israel. No one could agree with everything in these essays. I do not. But in the main they are both devastating and scrupulous and they are all indispensable. Fair-minded readers who have not yet thought through the issues, including some supporters of BDS, may wish to consult their consciences as well as their sense of history and reconsider. But this indispensable book is more than a dissection of gross canards. It is an anatomy of key intellectual and political corruptions of our time.

The book's 500-plus pages cover a lot of (contested) ground, with essays exploring the nexus between the boycott and the political left, the range of BDS-related activity on American campuses, and examples of Israeli-Palestinian collaboration in higher education, among other topics.

The editors deserve major kudos for having compiled an impressive anthology featuring contributions in opposition to the deeply sordid, yet potentially potent, Boycott, Divestment and Sanctions (BDS) movement.

To refuse to accept an imposed defensive crouch as one’s natural posture, as this book admirably does, also makes a case against academic boycotts of Israel.

...The book is essential for those who want to understand in some detail why an academic boycott of Israel is outright discrimination, and why it threatens not only Israeli professors and scholars, but the very reason for universities and the idea of free speech itself.

The recent successes and near-successes of the BDS campaign have forced liberal Jews to counterattack The result: a book which is both a useful anti-boycott resource and a fascinating psychological portrait of an elite look into the dilemmas and biases of American Jewish liberal academia.

For those who believe in the value and power of education and of the ability of knowledge to combat ignorance, [this book] is an invaluable collection.

This book does far more than make the case against academic boycotts of Israel: it reminds us what academic freedom actually means and its crucial importance in underpinning the entire scholarly edifice. We abandon this at our peril. At the same time there is also recognition that this alone is not enough to counteract the BDS movement. Equally as important is the need to mount a defence of liberal academic principles more broadly: to argue that knowledge is more than just identity and perspective; to assert the aspiration towards, and the possibility of, seeking truth; and to draw a distinction between scholarship and activism. This book is a vital step in this direction

The Case Against Academic Boycotts of Israel is 550 pages long, and it contains, in addition to essays, a dossier of official documents on the ASA and other boycott resolutions, as well as a short history of Israel. It is intelligent and wide-ranging, from David Caplan’s essay on the representation of Jews in current American literature to Shira Wolosky’s memoir of what it is actually like to teach Arab and Jewish students in an Israeli university

. . . the essays as a whole are essential reading, for those who want to understand, in detail, why an academic boycotts of Israel is discrimination, pure and simple, and why it threatens not only Israeli academics, and not just Jewish academics in addition, but the academy itself. It is essential reading.

This is a useful tool for individuals and groups that have Israel's interests in mind and have the opportunity to raise an objection to BDS.

The Case against Academic Boycotts of Israel features contributions from almost 30 scholars from the US, Israel and the UK. It includes essays opposing academic boycotts on principle; accounts of how a boycott motion was passed in 2013 by the American Studies Association in what Professor Nelson calls a 'very coercive' way; essays on Israeli history, culture and education, so 'people don’t remain ignorant about the country they are boycotting'; and analyses of the beliefs underlying the boycott, divestment and sanctions (BDS) campaign and its likely impact.