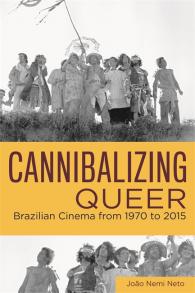 Through an analysis of contemporary Brazilian cinematic production, Cannibalizing Queer: Brazilian Cinema from 1970 to 2015 discusses which queer representations are erased and which are acknowledged in the complex processes of cultural translation, adaptation, and "devouring" that defines the Brazilian understanding of sexual dissidents and minorities. João Nemi Neto argues for Brazilian cinema studies to acknowledge the importance of 1920s modernism and of antropografia, a conceptual mode of cannibalism, to adopt and extrapolate a perverse form of absorption and raise the stakes on queer theory and postcolonialism, and to demonstrate how they are crucial to the development of a queer tradition in Brazilian cinema.

In five chapters and two "trailers," Nemi Neto understands the term "queer" through its political dimensions because the films he analyzes represent characters that conform neither to American coming-out politics nor to Brazilian identity politics. Nonetheless, the films are queer precisely because the queer experiences and affection explored in these films do not necessarily insist on identifying characters as a particular sexuality or gender identity. Therefore, attention to characters within a unique cinematic world raises the stakes on several issues that hinge on cinematic form, narrative, and representation. Nemi Neto interviews and examines the work of João Silvério Trevisan and provides readings of films such as AIDS o furor do sexo explícito (AIDS the Furor of Explicit Sex, 1986), and Dzi Croquetes (Dzi Croquetes, 2009) to theorize a productive overlap between queer and antropofagia. Moreover, the films analyzed here depict queer alternative representations to both homonormativity and heteronormativity as forms of resistance, at the same time as prejudice and heteronormativity remain present in contemporary Brazilian social practices.

Graduate students and scholars of cinema and media studies, queer studies, Brazilian modernism, and Latin American studies will value what one early reader called "a point of departure for all future research on Brazilian queer cinema."

This is a highly original and brilliant study of Brazilian cinema from the 1960s to the present day that makes a crucial connection between queer theory and the Antropofagia movement. Cannibalizing Queer is essential reading for film students, queer theorists, and Latin Americanists alike."

Cannibalizing Queer comes at a fortuitous moment. South and North Americans urgently need to embrace the queer category and reconnect with the anthropophagic principle proposed in the book. Assuming life in its heterogeneity will make it possible for us all to give freedom to the countless and diverse expressions of sexualities and gender identities.

17 hours 40 sec ago
Hey #movementdetroit fans! WSUPress's TECHNO REBELS is a great way to relive the excitement of @MovementDetroit all… https://t.co/f4nPn8uYj0
1 day 17 hours ago
Check out Cindy Hunter Morgan's new book at https://t.co/o1mzeoKv1M https://t.co/6W9FLg0RLa
2 days 20 hours ago
Wayne State University President M. Roy Wilson with his teacher in high school. Check out this image and many more… https://t.co/W3kp1D7dFX