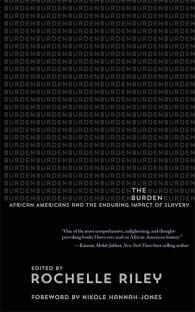 African Americans and the Enduring Impact of Slavery

The Burden: African Americans and the Enduring Impact of Slavery is a plea to America to understand what life post-slavery remains like for many African Americans, who are descended from people whose unpaid labor built this land, but have had to spend the last century and a half carrying the dual burden of fighting racial injustice and rising above the lowered expectations and hateful bigotry that attempt to keep them shackled to that past.

The Burden, edited by award-winning Detroit newspaper columnist Rochelle Riley, is a powerful collection of essays that create a chorus of evidence that the burden is real. As Nikole Hannah-Jones states in the book’s foreword, "despite the fact that black Americans remain at the bottom of every indicator of well-being in this country—from wealth, to poverty, to health, to infant mortality, to graduation rates, to incarceration—we want to pretend that this current reality has nothing to do with the racial caste system that was legally enforced for most of the time the United States of America has existed." The Burden expresses the voices of other well-known Americans, such as actor/director Tim Reid who compares slavery to a cancer diagnosis, former Detroit News columnist Betty DeRamus who recounts the discrimination she encountered as a young black Detroiter in the south, and the actress Aisha Hinds who explains how slavery robbed an entire race of value and self-worth. This collection of essays is a response to the false idea that slavery wasn’t so bad and something we should all just "get over."

The descendants of slaves have spent over 150 years seeking permission to put this burden down. As Riley writes in her opening essay, "slavery is not a relic to be buried, but a wound that has not been allowed to heal. You cannot heal what you do not treat. You cannot treat what you do not see as a problem. And America continues to look the other way, to ask African Americans to turn the other cheek, to suppress our joy, to accept that we are supposed to go only as far as we are allowed." The Burden aims to address this problem. It is a must-read for every American.

Rochelle Riley is an award-winning newspaper columnist who is no longer seeking permission to put the burden down. She has fearlessly called out elected officials who should have been ashamed of themselves and has helped raise millions of dollars for just causes, especially the fight for improved adult literacy. She offers commentary on MSNBC and NPR and contributes to Essence and Ebony magazines. She was inducted into the Michigan Journalism Hall of Fame in 2016, received the 2017 Ida B. Wells Award from the National Association of Black Journalists and Northwestern University, and was awarded the 2017 Eugene C. Pulliam Fellowship by the Society of Professional Journalists. She also is a global wanderer who has visited twenty-six countries and counting.

Rarely in American history has the disconnect between past and present been so obvious in our national discourse: with slavery recast as 'inconvenient' rather than devastating as the nation struggles to pretend away its legacy of racism. In this important series of essays, some of the nation's leading scholars, thinkers and artists help reframe our national dialogue to point toward real healing rather than the treacherous path of continued denial and destruction.

– Tananarive Due, author and activist, American Book Award winner, co-author of Freedom in the Family: a Mother-Daughter Memoir of the Fight for Civil Rights

This book is overflowing with truth telling. And page after page makes it painfully clear that until our nation fully owns and deals with the burden of enslavement of African Americans, all of America’s people can never be truly free.

The Burden is one of the most comprehensive, enlightening, and thought-provoking books I have ever read on African-American history. The insights into how slavery affects every aspect of America today from politics to economics to culture is powerfully presented by this remarkable essay collection.

As much as Americans want to deny it, slavery sits with us. It burdens us, as these essays brilliantly reveal. We need these striking essays to strike down our denial over the lingering effects of slavery.

– Ibram X. Kendi, National Book Award-winning author of Stamped from the Beginning: The Definitive History of Racist Ideas in America

The Burden: African Americans and the Enduring Impact of Slavery serves as a vital reminder that beneath America’s propagated claims of inclusion and diversity, lies a history muddied by the unsettling realities and present-day repercussions of over 200 years of American slavery. Rochelle Riley has assembled a powerfully written and thought-provoking collection of essays aimed at exposing the perpetual effects of slavery on the American psyche and eviscerating the misconception that modern commentary about slavery is nothing more than futile apprehension over events of our past. This provocative book makes it impossible for any reader to feign ignorance about the uncomfortable truths and persisting effects of American slavery. An essential read for anyone seeking a comprehensive understanding of the African-American experience, both past and present.

– Damon J. Keith, Judge for the United States Court of Appeals for the Sixth Circuit

[Rochelle Riley] has spent decades fighting for social good, and her latest project, The Burden: African Americans and the Enduring Impact of Slavery, is a collection of essays which aim to show that the effects of slavery remain.

Here we stand two years away from commemorating four hundred years of the inception of slavery in America and we still have yet to come to grips with its multi-generational impact. Rochelle Riley dutifully takes us through the necessary paces to confront America's original sin and our refusal to deal with its many implications in every facet of our society.

Now, in 2018, it's a critical time for The Burden: African Americans and the Enduring Impact of Slavery, an important, searing, moving, and necessary read.

A unique and exceptional read from cover to cover, "The Burden" is an especially and unreservedly recommended addition to both community and academic libraries.

The Burden will marinate in my consciousness, flashing in my mind like a highlight reel, reminding me of how much work still needs to be done in this country surrounding race.

The Burden has certainly achieved its major goal of attesting that postracism is a myth and that the ghost of slavery continues to determine and haunt the lives of African Americans, thus enlightening or changing the readers’ conception about the reality of racism in the US. The Burden, with its broad range of perspectives, is a recommended work for all readers, but more specifically for ones interested in black history, cultural studies, and social studies, with a specific focus on race relations in America.