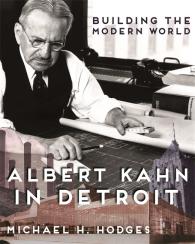 Building the Modern World: Albert Kahn in Detroit by Michael H. Hodges tells the story of the German-Jewish immigrant who rose from poverty to become one of the most influential architects of the twentieth century. Kahn’s buildings not only define downtown Detroit, but his early car factories for Packard Motor and Ford revolutionized the course of industry and architecture alike.

Employing archival sources unavailable to previous biographers, Building the Modern World follows Kahn from his apprenticeship at age thirteen with a prominent Detroit architecture firm to his death. With material gleaned from two significant Kahn archives—the University of Michigan’s Bentley Historical Library and the Archives of American Art at the Smithsonian Institution—Hodges paints the most complete picture yet of Kahn’s remarkable rise. Special emphasis is devoted to his influence on architectural modernists, his relationship with Henry Ford, his intervention to save the Diego Rivera murals at the Detroit Institute of Arts (unreported until now), and his work laying down the industrial backbone for the Soviet Union in 1929–31 as consulting architect for the first Five Year Plan.

Kahn’s ascent from poverty, his outsized influence on both industry and architecture, and his proximity to epochal world events make his life story a tableau of America’s rise to power. Historic photographs as well as striking contemporary shots of Kahn buildings enliven and inform the text. Anyone interested in architecture, architectural history, or the history of Detroit will relish this stunning work.

In clear, accessible prose, Hodges vividly brings to life the work of Detroit-based architect and coordinator of architectural efficiency Albert Kahn, invoking a personable, client-serving, humble individual in place of the corporate machine with which Kahn is often associated. Building the Modern World is architectural biography at its most elevated, where qualities of the man and attributes of buildings by his firm meet and correspond. The built environment of industrial capital is here embraced enthusiastically for what it brought to the city of Detroit, and to American cities in general, in the ‘Second Industrial Revolution.’

Michael Hodges makes a powerful case for the local and global impact of architect Albert Kahn. Hodges’s engaging text and evocative photographs detail the grandeur and elegance of Kahn’s civic architecture, often overlooked in accounts that treat Kahn primarily as a titan of industrial design. This compelling account weaves together the many threads of Kahn’s career—his humble origins as an immigrant, his difficult relationship as a Jewish professional with the virulently anti-Semitic Henry Ford, his fascinating contributions to the Soviet industrial revolution—to make the case that Kahn isn’t just an overlooked architect but a giant of the discipline, who bound together utilitarian and aesthetic values in a quintessentially American architectural style.

– Philip Kennicott, art and architecture critic for the Washington Post

Profusely illustrated throughout, "Building the Modern World: Albert Kahn in Detroit" is an extraordinary study of an extraordinary man and an essential, core addition to the community, college, and university library Architectural History collections in general, and Albert Kahn supplemental studies list in particular.

Hodges covers an extraordinary expanse of historical and architectural ground in a short work—his powers of synopsis and distillation are impressive. He allows himself some speculation—for example, how Kahn managed the unrepentant anti-Semitism of Ford—but always displays admirable intellectual discipline, avoiding precipitous inference. The author’s overarching case that Kahn is unjustly underestimated by scholars—he "virtually epitomized the historical figure who is famous while alive yet vanishes the minute he’s in the ground"—is persuasively made. By the end of the book, it’s hard to disagree with the view of historian Wayne Andrews that even Kahn’s "factories were often works of art." The architect was a maniacal workaholic, and so it makes sense that Hodges focuses on his professional achievements. But the author still furnishes a vivid sense of the man’s character and his private life as a "good, if often distracted, father and a devoted paterfamilias to his extended clan." Hodges includes pages and pages of gorgeous photographs of Kahn’s buildings that capture their magnificence and, even more than this intelligent biography, establish his undeniable stature as one of the finest architects of his time. A remarkable study of an architect’s works, both a historical and visual feast.