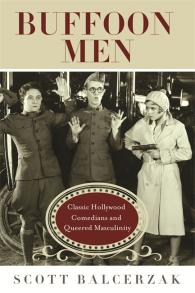 Film scholars and fans have used distinctive terms to describe the Classic Hollywood comedian: He is a "trickster," a "rebel," or a "buffoon." Yet the performer is almost always described as a "he." In Buffoon Men: Classic Hollywood Comedians and Queered Masculinity, Scott Balcerzak reads the performances of notable comedians such as W. C. Fields, Eddie Cantor, Jack Benny, Stan Laurel and Oliver Hardy, Bert Wheeler and Robert Woolsey, and Bud Abbott and Lou Costello through humor and queer theory to expose a problematic history of maleness in their personas. He argues that contrary to popular notions of Classic Hollywood history, these male comedians rearranged or, at times, rejected heteronormative protocols.

Balcerzak begins by defining the particular buffoonish masculinity portrayed by early film comedians, a gender and genre construct influenced by the cultural anxieties of the 1930s and '40s. In chapter 1, he considers the onscreen pairing of W. C. Fields and Mae West to identify a queered sexuality and drag persona in Fields's performance, while in chapter 2 he examines the two major constructions of Fields's film persona-the confidence man and the husband-to show Fields to be a conflicted and subversive figure. In chapter 3, Balcerzak considers the assimilation and influence of Eddie Cantor as a Jewish celebrity, while he turns to the cross-media influence of Jack Benny's radio persona in chapter 4. In Chapters 5 and 6, he moves beyond the individual performer to examine the complex masculine brotherhood of comedy duos Laurel and Hardy, Abbott and Costello, and Bert Wheeler and Robert Woolsey.

Buffoon Men shows that the complicated history of the male comedian during the early sound era has much to tell us about multimedia comedic stars today. Fans and scholars of film history, gender studies, and broadcast studies will appreciate Balcerzak's thorough exploration of the era's fascinating gender constructs.

Scott Balcerzak is assistant professor of film and literature in the Department of English at Northern Illinois University. He is the co-editor of Cinephilia in the Age of Digital Reproduction: Film, Pleasure, and Digital Culture, Vols. 1 and 2.

Buffoon Men is a major contribution to comedian studies, and offers a fascinating perspective on the queered performances by some of the most beloved funnymen of Hollywood's Golden Age. Scott Balcerzak brings his enormous scholarship and analytical flair to an examination of how these comedians disrupt or neurotically deconstruct 'traditional' masculinity.

Buffoon Men is a smart and perceptive study of the queer masculinities of major comedians of the early sound era. Balcerzak offers insightful readings of their films, paying close attention to the concerns of the comedian-comedy genre while at the same firmly grounding his claims in well-researched social history and gender theory. He convincingly shows how these stars' queer performances of masculinity sharply and hilariously connect with their onscreen straight cultural counterparts. The result is a fascinating treatment of these famous comics of filmdom that highlights their immediacy for viewers then and now.

– Steve Cohan, author of Masked Men: Masculinity and the Movies in the Fifties and Incongruous Entertainment: Camp, Cultural Value, and the MGM Musical

Balcerzak's analyses and close readings are rich and nuanced, his use of theory is substantial though never unreadable, and his perceptions about contemporary on-screen comedians are dynamic. Comedy is one of the least written about film genres, and Balcerzak's work serves as a landmark in the field. But is it appropriate to describe these comedians and their screen performances as "queer"? Summing up: Essential.

By concentrating on less critically acclaimed film comedians of the thirties, Balcerzak makes a far-reaching contribution to film comedy and masculinity studies-smart and original.

Overall, Buffoon Men is extensively researched and ripe with scholarship. It is an important text when considering the locus of today’s queered masculinity on television and film, as Balcerzak makes us ponder deeply the men of contemporary film and television, comedic and dramatic alike.

17 hours 29 min ago
Hey #movementdetroit fans! WSUPress's TECHNO REBELS is a great way to relive the excitement of @MovementDetroit all… https://t.co/f4nPn8uYj0
1 day 17 hours ago
Check out Cindy Hunter Morgan's new book at https://t.co/o1mzeoKv1M https://t.co/6W9FLg0RLa
2 days 20 hours ago
Wayne State University President M. Roy Wilson with his teacher in high school. Check out this image and many more… https://t.co/W3kp1D7dFX