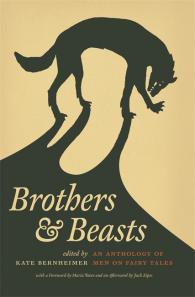 An Anthology of Men on Fairy Tales

It's appealing and fresh, thoughtful and often funny; the writers reveal themselves in stunning array, naked but never tawdry. Brothers and Beasts is for anyone who likes a good tale and treasures the act of imagining.

Despite the availability of several eloquent gender studies of fairy tales, a popular reference on men and fairy tales has so far been nonexistent. Brothers and Beasts offers a new perspective by allowing twenty-three male writers the chance to explore their artistic and emotional relationship to their favorite fairy-tale stories. In their personal essays, the contributors—who include genre, literary, mainstream, and visual media writers—offer new insight into men’s reception of fairy tales. Brothers and Beasts, the follow-up to Kate Bernheimer’s influential Mirror, Mirror on the Wall: Women Writers Explore Their Favorite Fairy Tales, offers new avenues for research in fairy-tale studies.

Bernheimer has invited many well-known writers to contribute to this volume, from Gregory Maguire, whose acclaimed titles include Wicked, Confessions of an Ugly Stepsister, and Son of a Witch, to Robert Coover, one of the premier authors of postmodern fiction, to Neil Gaiman, a well-known fantasy fiction writer and author of graphic novels. With a foreword by Maria Tatar and an afterword by Jack Zipes, the intimate and contemplative essays are framed by insight from two leading fairy-tale studies scholars.

Brothers and Beasts proves that men are deeply influenced by the childhood reading of fairy tales, despite the fact that these fantastic and memorable tales are often mistakenly considered to be the domain of women readers and writers. Students and teachers of fairy-tale and gender studies along with readers of contemporary literature will enjoy this accessible and intriguing volume.

Kate Bernheimer is the author of a fairy-tale trilogy (The Complete Tales of Ketzia Gold, The Complete Tales of Merry Gold, and The Complete Tales of Lucy Gold), and has edited three fairy-tale anthologies, including My Mother She Killed Me, My Father He Ate Me: Forty New Fairy Tales (Penguin, 2010). Her children’s book The Girl in the Castle Inside the Museum was a Publishers Weekly Best Book of the Year. She is founding editor of Fairy Tale Review. Associate professor and writer-in-residence at the University of Louisiana in Lafayette each spring, Bernheimer spends the rest of the year in Arizona. Her most recent book is a collection of eight tales, Horse, Flower, Bird.

The writing in this collection is uniformly nimble. Would that academic writing were so sprightly."

I read this enchanting collection cover-to-cover in two days. It's appealing and fresh, thoughtful and often funny; the writers reveal themselves in stunning array, naked but never tawdry. Brothers and Beasts is for anyone who likes a good tale and treasures the act of imagining."

– Lydia Millet, author of Oh Pure and Radiant Heart and My Happy Life

Brothers and Beasts is a creative delight, forcing some wonderful male writers and scholars to articulate their own relationship to fairy tales. It is insightful and intensely autobiographical."

– Jeannine Blackwell, co-author of The Queen's Mirror: Fairy Tales by German Women Writers, 1780-1900 and dean of the Graduate School at the University of Kentucky

For thousands of years, storytellers have drawn upon fairy tales to create fictions relevant to their own times, making use of their symbolic language to explore issues of gender, class, justice, power, and cultural identity. In Brothers and Beasts, twenty-four male writers make it clear why fairy tales are still important to a wide range of storytellers today. The essays here are both whimsical and scholarly; both archly provocative and deeply moving. This superb companion to Mirror, Mirror demonstrates the ways that the stories read in childhood continue to shape us as adults and why many writers return to them long after childhood is done."

– Terri Windling, author of The Wood Wife and other books