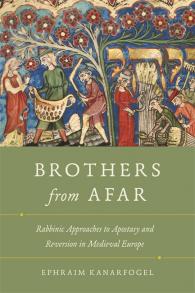 Rabbinic Approaches to Apostasy and Reversion in Medieval Europe

In Brothers from Afar: Rabbinic Approaches to Apostasy and Reversion in Medieval Europe, Ephraim Kanarfogel challenges a long-held view that those who had apostatized and later returned to the Jewish community in northern medieval Europe were encouraged to resume their places without the need for special ceremony or act that verified their reversion. Kanarfogel’s evidence suggests that from the late twelfth century onward, leading rabbinic authorities held that returning apostates had to undergo ritual immersion and other rites of contrition. He also argues that the shift in rabbinic positions during the twelfth and thirteenth centuries was fundamentally a response to changing Christian perceptions of Jews and was not simply an internal halakhic or rabbinic development.

Brothers from Afar is divided into seven chapters. Kanarfogel begins the book with Rashi (1040–1105), the pre-eminent European rabbinic authority, who favored an approach which sought to smooth the return of penitent apostates. He then goes on to explain that although Jacob Katz, a leading Jewish social historian, maintains that this more lenient approach held sway in Ashkenazic society, a series of manuscript passages indicate that Rashi’s view was challenged in several significant ways by northern French Tosafists in the mid-twelfth century. German Tosafists mandated immersion for a returning apostate as a means of atonement, akin to the procedure required of a new convert. In addition, several prominent tosafists sought to downgrade the status of apostates from Judaisim who did not return, in both marital and economic issues, well beyond the place assigned to them by Rashi and others who supported his approach. Although these mandates were formulated along textual and juridical lines, considerations of how to protect the Jewish communities from the inroads of increased anti-Judaism and the outright hatred expressed for the Jews as unrivaled enemies of Christianity, played a large role. Indeed, medieval Christian sources that describe how Jews dealt with those who relapsed from Christianity to Judaism are based not only on popular practices and culture but also reflect concepts and practices that had the approbation of the rabbinic elite in northern Europe. Brothers from Afar belongs in the library of every scholar of Jewish and medieval studies.

Ephraim Kanarfogel is the E. Billi Ivry University Professor of Jewish History, Literature, and Law at Yeshiva University. He is also the author of the award-winning books Jewish Education and Society in the High Middle Ages (1992), Peering through the Lattices: Mystical, Magical, and Pietist Dimensions in the Tosafist Period (2000), and The Intellectual History and Rabbinic Culture of Ashkenaz (2012), all published by Wayne State University Press.

Who was a Jew in the Middle Ages? Brothers from Afar illuminates the complexities at the intersection of Jewish law and medieval Jewish identity, conversion and gender, Ashkenaz and Sepharad. Kanarfogel’s penetrating scholarship contributes an important new chapter to the historical development of halakhah.

An erudite and richly documented study of how medieval European rabbis required reverting apostate Jews to undergo a range of rites of passage to return to the fold. It revises the approach of the late Jacob Katz, who claimed that this process occurred only in early modern times. Precisely because of their social proximity to Christians, medieval Jews needed boundary markers to reassure themselves that returning apostates could be trusted again. A masterful contribution to the social contexts of Jewish legal history that dazzles on every page.

This learned study is essential reading for those interested in the history of Jewish apostasy and reversion to Judaism. Its meticulous analysis of manuscript evidence fundamentally reorients understandings of the attitudes of medieval rabbinic authorities toward apostasy, opening new avenues for research in medieval Jewish-Christian relations.

Through extraordinary industriousness, Kanarfogel has unearthed a gold mine of material buried in medieval Hebrew manuscripts that sheds a whole new light on the place of repentant apostates in medieval Jewish societies and Jewish consciousness over the course of five centuries.

Drawing on previously unknown manuscript sources and the vast literature of Jewish law, Brothers from Afar offers readers a pathbreaking reassessment of the much-debated subject of apostasy. In this work of superb scholarship, Ephraim Kanarfogel reveals the inner workings of medieval Jewish public policy and the wider implications for Jewish-Christian relations in the Middle Ages and beyond.

An excellent assessment of the changing views of the medieval rabbis, this book would be a valuable addition to academic Judaic libraries.

Where does an individual person’s ‘Jewishness’ lie? Can it be taken away or given up? If so, are there any circumstances in which it can be regained? How and at what price? These complicated, multifaceted questions form the backbone of Ephraim Kanarfogel’s book Brothers from Afar: Rabbinic Approaches to Apostasy and Reversion in Medieval Europe. Brothers from Afar could prove influential beyond its intended readership and open up new avenues of investigation into underexamined social and religious dilemmas.

This is a remarkable and fascinating read. Living in medieval Europe was not easy for a Jew, and Kanarfogel writes of the complexities manifest in Jewish life then. While our approach to returnees today is that of Rashi, the underlying question of dealing with returnees is not a simple one, to which the author brilliantly explains those complexities and challenges and myriad struggles of life in medieval Europe.

In conversation with Dr. Ari Berman at Yeshiva University (February 18, 2021)

1 day 3 hours ago
Happy Pub Date to THE SPOOK WHO SAT BY THE DOOR, SECOND EDITION! This new edition of a literary classic now includ… https://t.co/XrCsLZvf4D
1 day 3 hours ago
RT @DarkProjections: Returned from a great two weeks in Europe to find copies of my new book! Kolchak:The Night Stalker, one of the Pion… https://t.co/kPJ5kKLRyr
2 days 27 min ago
RT @oneitadetroit: Thrilled that @WSUPress is releasing the 2E of Sam Greenlee's "The Spook Who Sat by the Door" tomorrow. Introductio… https://t.co/hZpAjxluIl