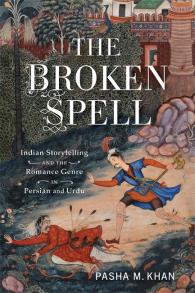 Indian Storytelling and the Romance Genre in Persian and Urdu

The Broken Spell: Indian Storytelling and the Romance Genre in Persian and Urdu is a monograph on the rise and fall in popularity of "romances" (qissah)—tales of wonder and magic told by storytellers at princely courts and in public spaces in India from the sixteenth century to the twentieth. Using literary genre theory, author Pasha M. Khan points to the worldviews underlying the popularity of Urdu and Persian romances, before pre-existing Islamicate rationalist traditions gained traction and Western colonialism came to prominence in India.

In the introduction, Khan explains that it was around the end of the nineteenth century that these marvelous tales became devalued by Orientalists and intellectually colonized Indian elites, while at the same time a new genre, the novel, gained legitimacy. Khan goes on to narrate the life histories of professional storytellers, many of them émigrés from Iran to Mughal-ruled India, and considers how they raised their own worth and that of the romance in the face of changes in the economics, culture, and patronage of India. Khan shows the methods whereby such storytellers performed and how they promoted themselves and their art. The dividing line between marvelous tales and history is examined, showing how and why the boundary was porous. The study historicizes the Western understanding of the qissah as a local manifestation of a worldwide romance genre, showing that this genre equation had profound ideological effects. The book’s appendix contains a translation of an important text for understanding Iranian and Indian storytelling methods: the unpublished introductory portions to Fakhr al-Zamani’s manual for storytellers.

The Broken Spell will appeal to scholars of folklore and fairy-tale studies, comparative literature, South Asian studies, and any reader with an interest in India and Pakistan.

Pasha Mohamad Khan is the chair in Urdu language and culture and assistant professor at the Institute of Islamic Studies at McGill University. He is a scholar of literature, and particularly of marvelous tales, in Urdu-Hindi and other South Asian languages including Persian and Punjabi.

Within dastans, powerful magicians create their own enchanted worlds. Then powerful storytellers called dastan-gos create narratives about their exploits. And now a powerful scholar creates for us an evocative account of the whole dastan tradition. Khan’s fine work not only offers a lucid historical analysis of the genre, but also wields some narrative magic of its own.

This is the most comprehensive study to date of the long tradition of storytelling in the context of Persianate literary cultures. Written in an elegant style and based on a myriad of primary and secondary sources, it will be of enduring value to scholars and students of literature, folklore studies, and history.

Faithful to the spirit of the most alluring of tales, with breathtaking insights and cadence, Khan illuminates the world of the South Asian verbal arts. The author’s skillful engagements with history and thoughtful deployment of ethnography, along with his exquisite translations of challenging sources and compelling application of theory, open up new vistas of research across disciplinary boundaries. The luminous discretion with which Khan weaves his narrative and sensitively draws from a spectrum of sources is an astonishing feat indeed.

– Syed Akbar Hyder, Director of the Hindi-Urdu Flagship Program, the University of Texas at Austin

Pasha M. Khan introduces his audience to the fascinating world of traditional Muslim storytelling in India. Focusing on the genre of ‘romance,’ its heyday in the seventeenth and eighteenth centuries, and its decline in the nineteenth century, the author unfolds a colorful tapestry of detail concerning both practical and theoretical aspects of storytelling by situating the craft as well as the performers in a rich historical, cultural, and intellectual context. Rehabilitating traditional storytelling in India, the book also makes significant contributions to general discussions of genre, relating to both the romance and the emerging novel.

Through their perceptive analysis of two major storytelling traditions of the Indian subcontinent, Khan and Stewart draw our attention to the modes of meaning-making that such narratives enabled in the premodern world. They show us ways in which such stories were integral to the persistence of societies. They reclaim these forms of storytelling and demonstrate how social life went hand in hand with the life of aesthetic forms. They invite us to expand our horizons by witnessing the worlds these storytellers created and shaped for their premodern listeners. Like their storytellers, they too recount the stories of faraway people and places and alert us to what language and literature can accomplish in any culture.

Khan’s monograph provides a fascinating insight into Indian storytelling in Persian and Urdu, focusing not solely on the stories themselves but on the contextual, historical and narratological factors that influenced and shaped the genre.