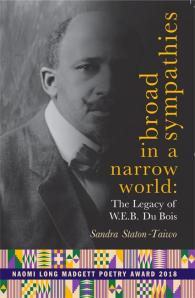 Broad Sympathies in a Narrow World

The Legacy of W.E.B. Du Bois

Broad Sympathies in a Narrow World: The Legacy of W.E.B. Du Bois by Dr. Sandra Staton-Taiwo is a collection of poetic reflections on the public and private life of an American intellectual giant. For more than half of the twentieth-century, Dr. W.E.B. Du Bois (1868—1963) was a major voice in every significant debate concerning political policies and strategies impacting the lives of African Americans and other people of color. As the first African American to earn a Ph.D. at Harvard, and then a co-founder of the National Association for the Advancement of Colored People, and editor of its journal, The Crisis, Du Bois’s life’s work as a scholar, writer, and political spokesperson rendered him the most prestigious African American leader in the United States. He also enjoyed international acclaim for his leading role in the movements for independence of African nations and Pan-African unity.

Though DuBois is recognized as the founder of the discipline of sociology, his scholarship spanned multiple arenas of research and discourse, including history, literary criticism, philosophy, and political science. DuBois was also a novelist and a poet. For his anti-war activism and his powerful protests as a public intellectual against racial inequities in the United States, he was harassed by the U.S. government, and ultimately left this country to live in exile in Ghana, West Africa, invited there by President Kwame Nkrumah.

Staton-Taiwo’s poems celebrate the greatness of Dubois’s political vision and engagement, while intuiting the unhappy lives of the women who lived in his shadow. Several poems assess twenty-first century race relations in the U.S. in the light of DuBois’s twentieth-century insights. Allusions to well-known themes and iconic lines from DuBois’s writings weave a unifying thread throughout the collection. Readers will be challenged and delighted by Staton-Taiwo’s rich, sophisticated perspectives and artistry.

Dr. Sandra Staton-Taiwo is a resident of Montgomery, AL. She earned her doctorate in African American literature from Howard University in 2001. Dr. Staton-Taiwo has taught English literature and creative writing at several colleges, including Penn State York and Gettysburg College, and is presently a faculty member at Alabama State University.