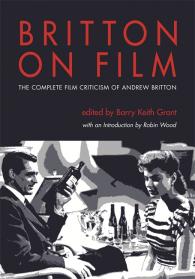 Edited by Barry Keith Grant
With an Introduction by Robin Wood

Britton on Film is an indispensable collection: the voice as fresh, and the arguments as urgent, as ever.

For fifteen years before his untimely death, Andrew Britton produced a body of undeniably brilliant film criticism that has been largely ignored within academic circles. Though Britton’s writings are extraordinary in their depth and range and are closely attuned to the nuances of the texts they examine, his humanistic approach was at odds with typical theory-based film scholarship. Britton on Film demonstrates that Britton’s humanism is also his strength, as it presents all of his published writings together for the first time, including Britton’s persuasive readings of such important Hollywood films as Meet Me in St. Louis, Spellbound, and Now, Voyager and of key European filmmakers such as Sergei Eisenstein, Jean-Luc Godard, and Bernardo Bertolucci.

Renowned film scholar and editor Barry Keith Grant has assembled all of Britton’s published essays of film criticism and theory for this volume, spanning the late 1970s to the early 1990s. The essays are arranged by theme: Hollywood cinema, Hollywood movies, European cinema, and film and cultural theory. In all, twenty-eight essays consider such varied films as Hitchcock’s Spellbound, Jaws, The Exorcist, and Mandingo and topics as diverse as formalism, camp, psychoanalysis, imperialism, and feminism. Included are such well-known and important pieces as "Blissing Out: The Politics of Reaganite Entertainment" and "Sideshows: Hollywood in Vietnam," among the most perceptive discussions of these two periods of Hollywood history yet published. In addition, Britton’s critiques of the ideology of Screen and Wisconsin formalism display his uncommon grasp of theory even when arguing against prevailing critical trends.

An introduction by influential film critic Robin Wood, who was also Britton’s teacher and friend, begins this landmark collection. Students and teachers of film studies as well as general readers interested in film and American popular culture will enjoy Britton on Film.

Barry Keith Grant is professor of film studies and popular culture at Brock University in Ontario, Canada. He is the author or editor of numerous books, including Documenting the Documentary (Wayne State University Press, 1998), Voyages of Discovery: The Cinema of Frederick Wiseman, Film Genre Reader, Film Genre: From Iconography to Ideology, and Auteurs and Authorship: A Film Reader.

Whether discussing George Eliot or Hitchcock, Blake or Ophuls, Britton's analyses-of a film text, a critical argument, or a cultural moment-challenge orthodoxy and expose imprecision. Britton on Film is an indispensable collection: the voice as fresh, and the arguments as urgent, as ever."

– Edward Gallafent, reader in film the University of Warwick and author of On Directors: Quentin Tarantino

Andrew Britton is a critic on fire. His ire is ablaze throughout these essays, particularly at the abstract, arcane, and illogical follies of theorizing away from the palpable grain of the text. Formalists and Marxists alike get taken to the woodshed, their flaws set aglow from the bite of Britton's lashings. Britton's own readings of specific films detail the ways in which sex and politics, desire and authority intertwine in concrete, historically situated ways. This collection is a treasure house of insights by a critic of formidable power."

– Bill Nichols, professor of cinema at San Francisco State University and author of Introduction to Documentary and Representing Reality

Andrew Britton's remarkable film criticism is distinguished by its keen intelligence, profound erudition, and consistent seriousness. It is criticism of the highest order, always placing film within the history of culture. By so doing, Britton gave to film studies a special dignity. In his brief life, Andrew Britton created an extraordinary legacy for all who care about the serious analysis of cinema. Barry Grant has performed a considerable service by returning this work to us."

– Christopher Sharett, professor of communication and film studies at Seton Hall University and author of The Rifleman

Even if you don't agree with Robin Woods claim in his introduction that Britton was, and remains, quite simply, the greatest film critic in the English language," this hefty collection, 534 large-format pages long, certainly proves that Wood's cantankerous Marxist disciple, who published mainly in Movie (UK) and CineAction (Canada), was a formidable figure."