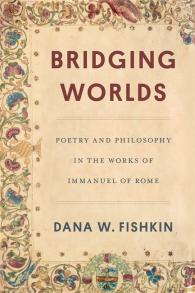 Poetry and Philosophy in the Works of Immanuel of Rome

Ma?berot Immanuel is a collection of twenty-eight chapters in Hebrew of rhymed prose and poetry written by the poet and amateur philosopher Immanuel of Rome during an era of rapid political change in late medieval Italy. The final chapter, Mah?beret Ha-Tofet Ve-ha-‘Eden (A Tale of Heaven and Hell), like Dante’s Commedia, depicts Immanuel’s visits to hell and heaven. Bridging Worlds focuses on the interrelation of Immanuel’s belletristic work and biblical exegesis to advance a comprehensive and original reading of this final chapter. By reading Immanuel’s philosophical commentaries and literary works together, Dana Fishkin demonstrates that Immanuel’s narrative made complex philosophical ideas about the soul’s quest for immortality accessible to an educated populace. Throughout this work, she explains the many ways Mah?beret Ha-Tofet Ve-ha-‘Eden serves as a site of cultural negotiation and translation.

Bridging Worlds broadens our understanding of the tensions inherent in the world of late medieval Jewish people who were deeply enmeshed in Italian culture and literature, negotiating two cultures whose values may have overlapped but also sometimes clashed. Fishkin puts forth a valuable and refreshing perspective alongside previously unknown sources to breathe new life into this extremely rich and culturally valuable medieval work.

Dana Fishkin is an associate professor of history at Touro University in New York. She has published articles in Prooftexts and the Jewish Quarterly Review. She is a contributor for Jewish Romance in the Middle Ages and theEncyclopedia of Skepticism.

2 days 25 min ago
Now a National Jewish Book Award Finalist! @JewishBook https://t.co/qTKAeUEPVX
2 days 3 hours ago
RT @Steph_Steinberg: Tomorrow @ 7 p.m.! Join me and @DETWritingRoom at The Whitney for our first #2023AuthorSeries event ft. @waynestate… https://t.co/pssbi2NLNs
6 days 5 hours ago
SAVE THE DATE! Join author Desiree Cooper and illustrator Bec Sloane this Saturday for a behind the scenes look at… https://t.co/cKDBmbewOa