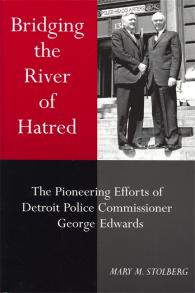 Bridging the River of Hatred

The strength of this book is that it shows that determined leadership can make a difference.

Bridging the River of Hatred portrays the career of George Clifton Edwards, Jr., Detroit's visionary police commissioner whose efforts to bring racial equality, minority recruiting, and community policing to Detroit's police department in the early 1960s met with much controversy within the city's administration. At a crucial time when the Civil Rights movement was gaining momentum and hostility between urban police forces and African Americans was close to eruption, Edwards chose solving racial and urban problems as his mission. Incorporating material from a manuscript that Edwards wrote before his death, supplemented by historical research, Stolberg provides a rare case study of problems in policing, the impoverishment of American cities, and the evolution of race relations during the turbulent 1960s. Edwards' vision and hope for Detroit gives depth to the national view of Detroit as a symbol of urban decline and offers lessons to be applied to current social and urban problems.

Mary Stolberg, a former reporter for the Pittsburgh Press, is the author of Fighting Organized Crime (Northeastern University Press, 1995).

Stolberg's compelling book tells the story of the political career of George Edwards. Focusing on Edwards's term as police commissioner for Detroit, the author closely examines the strengths and weaknesses of liberalism as applied to community relations in the city....The strength of this book is that it shows that determined leadership can make a difference. . . . Students of urban affairs, African American history, and law enforcement can gain valuable insights from this work.

In her book, Ms. Stolberg lets us meet Judge Edwards in a glorious testimony to his early works while at the same time providing a scholarly work for those studying American racial politics from our century's midpoint . . . a fascinating look at the overt nature of Northern racism in the middle of the century.

2 days 26 min ago
Now a National Jewish Book Award Finalist! @JewishBook https://t.co/qTKAeUEPVX
2 days 3 hours ago
RT @Steph_Steinberg: Tomorrow @ 7 p.m.! Join me and @DETWritingRoom at The Whitney for our first #2023AuthorSeries event ft. @waynestate… https://t.co/pssbi2NLNs
6 days 5 hours ago
SAVE THE DATE! Join author Desiree Cooper and illustrator Bec Sloane this Saturday for a behind the scenes look at… https://t.co/cKDBmbewOa